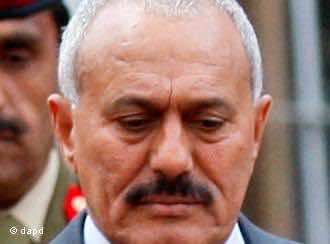 Embattled Yemeni President Ali Abdullah Saleh has announced he will renounce power after months of unrest in his country. But opponents are skeptical – it’s not the first time Saleh has promised to abdicate.

Yemen’s president used a speech on state television Saturday to announce his resignation “in the coming days” after months of protests against his 33-year rule that have left the poor country teetering on the brink of civil war.

“I reject power and I will continue to reject it, and I will be leaving power in the coming days,” Ali Abdullah Saleh announced.

But Yemen’s government said his exit was not imminent, and critics of Saleh dismissed the announcement as political brinkmanship.

‘In the coming days’

“Where is the catch?” asked Gregory Johnsen, a Yemen scholar at Princeton University. “Saleh is dealing with a trust deficit in Yemen, and Yemenis are very wary of promises from this president.”

In fact, phrases like “in the coming days” tend to have a flexible meaning for Saleh, who returned to Yemen from treatment in Saudi Arabia a month after his vice president said repeatedly he would return “in a few days.”

Saleh has offered a long list of apparent concessions since activists – buoyed by the Arab Spring revolutions in Egypt and Tunisia – first took to the streets of the Yemeni capital Sanaa in January to protest for an end to his rule and for democratic reforms.

With Yemen paralyzed by the protests and Saleh’s control significantly weakened, the president has openly agreed to forge a deal on numerous occasions. Any agreement would aim to bring about a power transition in the form of early elections and the formation of a new opposition-led cabinet.

That arrangement, brokered by Gulf Arab states and backed by the US, fell through three times as Saleh came up with last minute excuses for not signing.

United Nations diplomats have said they are converging on international consensus for issuing a Security Council resolution that could intensify pressure on the country to finalize the power transfer, termed the Gulf initiative.

The council is set to discuss Yemen at an upcoming session, possibly next week, prompting opponents to point out the timeliness of Saleh’s latest willingness to renounce power.

“This is new propaganda from Saleh before Yemen is discussed at the Security Council,” said Mohammed al-Sabri, a spokesman for the opposition’s political coalition. “Four months have passed since he said he accepted the [Gulf initiative], so what is stopping him? He doesn’t even need a few days to accomplish this.”

Saleh is not only facing diplomatic pressure, however. On Friday the Nobel Peace prize was awarded to Tawakkul Karman, one of the leading activists who has organized street protests in Sanaa directed at toppling Saleh’s regime.

Karman used the prize to draw attention to the ongoing situation in Yemen and to press home the message that street mobilization will not stop until the uprisings claim Saleh’s regime, too.

“This is a victory for the Yemeni people, for the Yemeni revolution and all the Arab revolutions,” she said in Sanaa after hearing she was chosen for the prize. “Our peaceful revolution will not rest until we topple Saleh and establish a civilian state.”