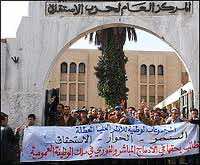 Nationalism is deeply ingrained in every Moroccan’s disposition. It is undefined, inborn, eternal and colorless. It can’t be and shouldn’t be represented or abridged in some silly and even demeaning icons. Nationalism is beyond couscous, Jelaba, Jamaa lafna and camels. It is too sublime to be symbolized by the Fnayr hiphop group or some sport and cinema figures simply because they are paid for every single act or word they do. There is a difference between offering services and favors.

One can feel that his sense of nationalism is functioning when he participates in a debate about a crucial national topic or event. Let us take the Western Sahara case or Sebta and Mellila crisis and the tense atmosphere between Morocco and Algeria or the strained relationship with Spain.

Any Moroccan, when it comes to these issues, appears to be a great strategic expert or an experienced militant, or a shrewd diplomat or a great academic lecturer. He analyses, diagnoses, opines, suggests…. Any Moroccan: young or old, male or female, native or expatriate appears to be zealous, loyal, and even chauvinist in defending his country’s position though his knowledge of the issue might seem fragmentary and even scarce. In fact, he converses subconsciously from his emotional perspective that mirrors the light of his nationalism.

Moroccans utter anger and dissatisfaction not due to their country. Rather it is because of those who hold the reins of the realm, that instead of serving and improving socially, economically, and culturally this nation, have chosen rather to secure their positions for life in a coward, base and selfish way. It is because of those fellow gluttons who have been lavishing our money carelessly in swanky castles and cars and satiating their depraved taste and carnal pleasure.

Our love and adulation for our country is beyond description. Even though national events, when these feelings can be manifested, are scarce, one can easily remember his national blood rolling and boiling inside his veins out of joy and ecstasy when the national football team was defeating one team after the other in the 2004 African Cup in Tunisia. What can we call this?  Isn’t it nationalism? When Hicham Elgarouj stumbled and fell down in Sydney’s Olympics, how sad, sullen and downcast we became. What can we call this? Isn’t it nationalism?

When the youth take to the streets days and nights asking for democracy, justice and bringing those who are corrupt to the courts; what can we call this; isn’t it nationalism? For me, it is these who are the real patriots, the real lovers of this country simply because their love is not paid for. They love this nation expecting nothing in return.

Too much ink has been spent about the world’s biggest flag, the tallest Mosque, the great football victory, the King’s May historic speech, the unprecedented constitution …etc, portraying them as the epitome of nationalism and loyalty. What roiled me is the rank hypocrisy of those who have the guts to harp about change, citizenship, the national interest in this very delicate period while holding tight their red passports.

I do remember that in the early 60s, John F. Kennedy challenged the American youth in a very influential and touching speech. He said “ask not what your country can do for you, but ask what you can do for your country”.  I think this saying is true at any time and any place. Moroccans should not stay with heir hands in their pockets waiting for Godot. We need to take a step forward even with the little means and effort we have at out disposal. It is said, “if you desire honey, be patient for bees’ bites”.

I have a solid belief that Morocco is not black, and it is not white. It is not a place of wars, oppression, dictatorship, deprivation and wretches; and it is not a country of peace, fairness, democracy, welfare and happiness. Let us be reasonable an insightful, for those who see Morocco as a black nation, which color would they choose to paint Sudan, Somalia, Haiti, Afghanistan, Iraq among other examples that are legion.

Do not be sad because you do not have a car, others’ legs are amputated. Often when we face obstacles in our day-to-day life, our hurdles seem very small in comparison to what many others have to face. Moreover, it should be stamped in the tablet of each one’s heart and mind that our Almighty God didn’t promise days without pain, laughter without sorrow, sun without rain, but He did promise strength for the day, comfort for the tears, and light for the way.

Mahmoud Seddik is a contributor to Morocco World News.