Morocco World News
Home News Africa A woman poses in front of a graffiti representing the sun on... 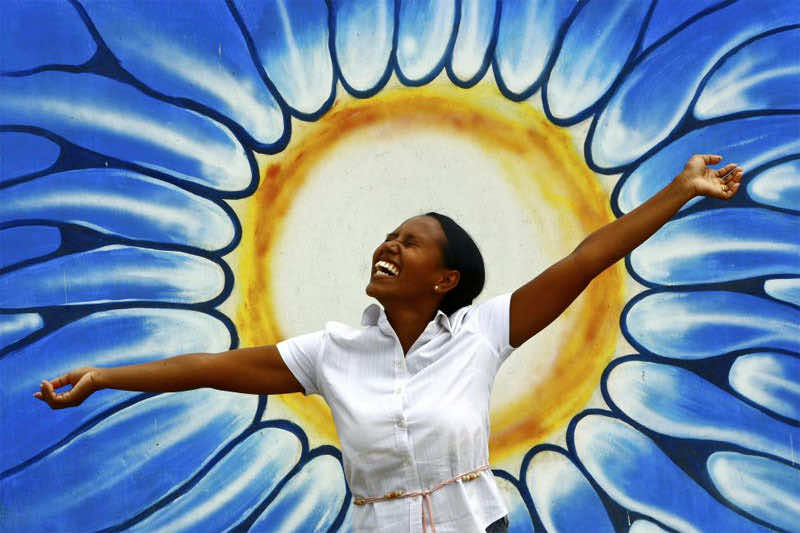 Secretary-General Ban Ki-moon today urgedthe world to allocate more resources for the treatment of mental disorders, saying that too little funding was devoted to mental health despite the debilitating nature of the illnesses and the fact they can be prevented or treated effectively.“Deaths, disability and distress caused by mental disorders need to find their rightful place in the public health agenda,” said Mr. Ban said in a message to mark World Mental Health Day, whose theme this year is “investing in mental health.”

“There is no health without mental health,” said the Secretary-General, noting that mental disorders are responsible for 13 per cent of the global disease burden. “Resources allocated for mental health by governments and civil society are habitually too little, both in human and financial terms.”

According to the United Nations World Health Organization (WHO), one in four people will require mental health care at some point in their lives, yet on average, global spending on mental health is still less than $3 per capita per year.

In low-income countries, expenditure can be as little as $0.25 per person per year, according to WHO’s Mental Health Atlas 2011 released today.

The global economic downturn and associated fiscal austerity measures have resulted in rising incidence of mental ill-health across the world, a situation exacerbated by the fact that the mental problems often place severe financial burden on individuals and households, Mr. Ban pointed out.

Individuals with mental health problems and their families endure stigma, discrimination and victimization, depriving them of their political and civil rights and constraining their ability to participate in the public life of their societies, the Secretary-General added.

“We cannot expect improvement in global mental health statistics unless we increase financial and other support for promoting mental health and providing adequate services to those who need them,” he said.

“Feasible, affordable and cost-effective measures for preventing and treating mental disorders exist, and are being implemented, for example through WHO’s Mental Health Gap Action Programme (mhGAP).

“However, if we are to move decisively from evidence to action, we need strong leadership, enhanced partnerships and the commitment of new resources. Let us pledge today to invest in mental health. The returns will be substantial,” said Mr. Ban.

According to the atlas, the bulk of resources earmarked for mental health are often spent on services that serve relatively few people.

“Governments tend to spend most of their scarce mental health resources on long-term care at psychiatric hospitals,” said Ala Alwan, WHO Assistant Director-General of Noncommunicable Diseases and Mental Health.

“Today, nearly 70 per cent of mental health spending goes to mental institutions. If countries spent more at the primary care level, they would be able to reach more people, and start to address problems early enough to reduce the need for expensive hospital care.”

Mental health services should focus equally on providing patients with a combination of medicines and psychosocial care, but in lower-income countries, shortages of resources and skills often result in patients only being treated with medicines. The lack of psychosocial care reduces the effectiveness of the treatment.

Across the low-and middle-income group of countries, more than three quarters of people in need of mental health care do not even receive the most basic services, according to WHO.

“Almost half of the world’s population lives in a country where, on average, there is one psychiatrist (or less) to serve 200,000 people,” said Shekhar Saxena, Director of Mental Health and Substance Abuse at WHO. “Many low-income countries have less than one mental health specialist per one million population.”

WHO launched mhGAP in 2008 to assist countries to scale up services for mental, neurological and substance use disorders. The programme provides knowledge and skills to health-care providers such as doctors, nurses and health-care workers to identify and manage these disorders.