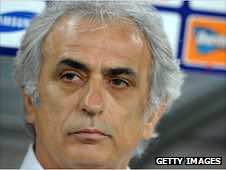 Algeria coach Vahid Halilhodzic has praised his players despite their failure to make the Africa Cup of Nations finals in 2012.

The Desert Foxes missed out on qualification for Equatorial Guinea and Gabon, despite beating Central African Republic (CAR) 2-0 – a result rendered irrelevant by Morocco’s 3-1 victory over Tanzania.

It was a spirited performance by the Algerians, who needed victory by a huge margin to be in contention, even if the result in the other Group D game had gone their way.

Hassan Yebda put them in front after just two minutes before Foued Kadir doubled the lead on the half-hour, but it was not enough to see the 2010 Nations Cup semi-finalists progress.

“[The players] really played a heroic match,” he said.

“I think we were probably lacking a third goal. There were three or four occasions when we could have scored a third time, but that’s not a criticism, coaches are always a little dissatisfied.

“On the one hand, it’s true that 15 months ago we were in the World Cup, and today we haven’t qualified for the Nations Cup, and that’s hard to bear.

“But on the other hand this gives me the inspiration to improve things.

“For our next two matches I really intend to do all we can to qualify for the next World Cup.”

Halilhodzic – who only took charge of the team ahead of their final two games – also said that the damage was done early on in Group D, when Algeria drew their first game 1-1 at home to Tanzania and lost to CAR 2-0.

“Perhaps our victory [on Sunday] has given us many regrets because maybe this team could have done more, but unfortunately even if we had won, I think that after our first game we were unlikely to have qualified for the Nations Cup.

“It’s a regret but it’s also the chance for me to create something and to build something new.”