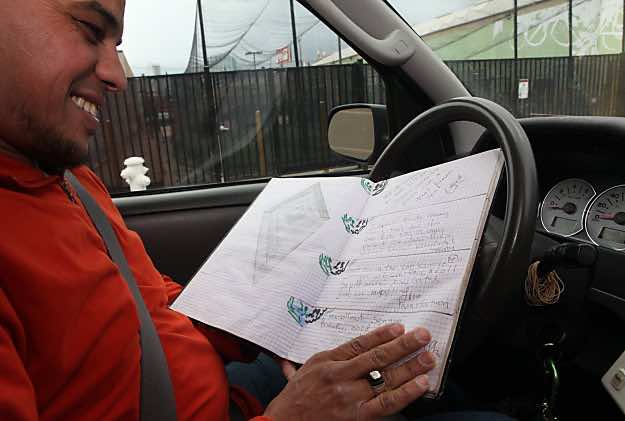 Cab driving is his trade, but the way Sulaymaan Cherif approaches his work, he’s also a life coach and dispenser of wisdom.

Cherif, 43, emigrated from Morocco in 1996. Divorced, he lives alone in a Richmond District apartment where he served Moroccan mint tea and bread while discussing his job and his life.

I have a guest book in my cab. When I have a good conversation with somebody, and they’re nice and say they like me, they start writing in my book.

You advise people, people advise you. Somebody gets in your cab, they cry. Having a problem with their parents, their boyfriend, their husband. You have a communication. You are like in the doctor office.

I tell her, “There is no difference between me and Dr. Phil. Only difference, Dr. Phil has a studio and camera.”

I’m from Casablanca. It’s my city, where I born. I have three older brothers and two sisters. I am the baby of the family. My dad got married when he was very old. He died at 105, in 1984. He lived through six kings in Morocco.

I moved to United States in 1996 and lived two years in Fresno. I moved to San Francisco in 1998. To be cabdriver, you took a class for one week and they give you a certificate. You learn, like, the names of the hotels, the locations of the hotels. Museums, hospitals, cross streets.

When you get a certificate, back then, you take a written test at Hall of Justice to get a license to drive a taxi in San Francisco. When you pass that test, you are recognized from the city as a cabdriver.

In the beginning, driving a cab was hard. The good part is, most San Francisco people are very helpful. They tell you which way to go, shortcuts. They don’t scream on you. They say, “It’s OK, you will learn.” Back then, there is no GPS.

I work for Luxor Cab. I share a cab with my friend; we have a lease. We trade shifts and when you finish your shift, you have to put the gas. You return your waybill to the company, and if there’s any problem with a customer, you have to report it.

Once I pick up a guy with his girlfriend and he’s drunk. His girlfriend is telling him how he treating his mom kind of badly. “Your mom, she’s nice to you.” I take them to Leavenworth and Filbert.

One week later I pick him up. He get in my cab alone; now he is not drunk. I say, “Leavenworth and Filbert?” “How do you know?” I tell him, “You have an Asian girlfriend?” He say, “What! You know everything about me?”

I tell him, “Last week you were drunk and I pick you up from 16th and Valencia. You have a very nice girl. You have to take care of her. And more than that, you have to be more nice to your mom!”