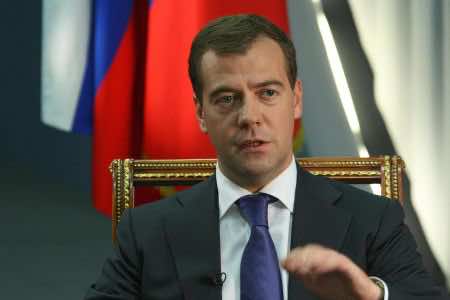 Moscow and Beijing are ready to propose a UN resolution on Syria that is more “balanced” than the West’s draft that they controversially vetoed last week, Foreign Minister Sergei Lavrov said Monday.

Lavrov said in an interview with Profil magazine that the Moscow-drafted version would condemn violence carried out both by the regime of Bashar al-Assad and the rebel opposition.

His comments came as the Kremlin’s Africa envoy Mikhail Margelov and Qadri Jamil, a communist and member of the so-called “internal opposition” in Syria, urged all conflicting parties to sit down for talks.

Russia and China last week infuriated the West by blocking a UN resolution against Assad’s deadly crackdown on protests, even after the West dropped the word “sanctions” from a draft to temper Russian opposition.

“We propose to adopt a balanced resolution that would condemn violence from both sides,” Lavrov told Profil magazine in comments released Monday.

“At the same time we need to demand from Assad a continuation of reforms which he has already embarked upon.”

“Apart from that, we need to encourage the Syrian opposition to come to the negotiating table and try to reach an agreement. Together with our Chinese partners we are ready to offer such a resolution,” Lavrov said.

The foreign minister expressed concern that the West-drafted resolution would open the way for a full-scale arms embargo against Russia’s traditional ally in the Middle East.

“We remember how an embargo was implemented in relation to Libya,” he said. “We are also well aware of our partners’ ability to arm one of the sides in the conflict despite an embargo,” he said wryly.

He accused the West of seeking to discourage the opposition from holding talks with Assad.

The interview was released as Margelov, head of the upper house of parliament’s foreign affairs committee, hosted for talks a Syrian delegation led by Jamil, a member of the so-called “internal opposition” seen as advocating dialogue with Assad.

“The Russian veto is a last call for the authorities and the opposition to come to the negotiating table and start national dialogue,” the state RIA Novosti news agency quoted Margelov as saying.

“The Russian veto against the Syria resolution is by no means carte blanche for the current regime in Syria to behave as it pleases, it is not an indulgence for either the regime or the opposition.”

Outgoing President Dmitry Medvedev said on Friday that Assad should either reform or go but warned that Moscow would continue blocking any attempts by the West to oust him from power.

Speaking ahead of his planned talks with Russian deputy foreign minister Mikhail Bogdanov on Tuesday, Jamil said his delegation travelled to Moscow to express gratitude for vetoing the West-sponsored draft.

“It is a good example of how you can prevent the interference of foreign countries in Syria’s domestic affairs,” he told AFP after talks with Margelov.

Critics see Jamil as too close to Assad. He denies this, saying he represents the “patriotic” opposition as opposed to those based outside Syria and siding with the West.

He said time was running out for dialogue, noting talks between the regime and the opposition should also include a loose-knit people’s movement including the so-called “the internal opposition.”

The Russian foreign ministry confirmed it would host Jamil for talks Tuesday.