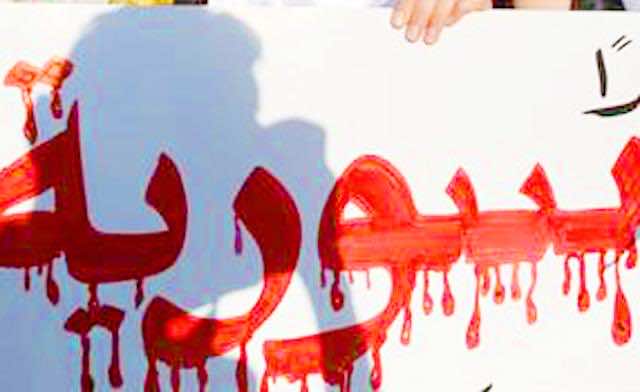 More than 30 people were killed in clashes across Syria, including 14 civilians and 17 soldiers, the Syrian Observatory for Human Rights said on Monday, as army forces continued to pound the cities of Homs and Qamishli.

Seven of the 14 civilians killed on Sunday were gunned down by security forces in the central city of Homs, the Britain-based Syrian Observatory for Human Rights said, adding that seven others were killed in other towns.

“It was like a war scene in Homs, where blasts and sound bombs were heard all over town, with heavy machine guns also being fired,” said officials with the Local Coordination Committees (LCC), which organizes protests on the ground.

“A lot of homes were destroyed. Nine people were killed and dozens wounded. Security agents and pro-regime militias prevented ambulances from evacuating the wounded,” the officials said.

It said the regime “attacked the Homs region in yet another desperate effort to make its free residents bow and to snuff out the revolution.”

Activists said Army forces pounded Qamishli through the night on Sunday. The city was the scene of a mass rally on Saturday against the regime of President Bashar al-Assad during the funeral of Mishaal Tammo.

Gunmen shot Tammo, a Kurdish opposition figure, dead on Friday in his home in the east of the country, activists said.

A Syrian army defector, meanwhile, has called for military aid to help his armed opposition group topple the Damascus regime.

Colonel Riad al-Assad, who defected in July, appealed for weapons for an armed opposition group he set up called the “Syrian Free Army.”

But he rejected any direct foreign military intervention in Syria. His statements
were published by the English-language Hurriyet Daily News on Monday.

“If the international community helps us, then we can do it, but we are sure the struggle will be more difficult without arms,” he said.

But he added that “nobody is in favor of any foreign country’s intervention into Syria.”

Col. Assad defected from the Syrian Air Force in July and is currently staying at a refugee camp in Turkey’s Hatay province, home to around 7,500 Syrians who fled the violence.

He said he was in touch with the Syrian National Council, an opposition bloc set up during talks in Istanbul last month to unite opponents of Assad’s regime.

The Turkish prime minister, Recep Tayyip Erdogan, is expected to soon announce sanctions against Damascus in protest against the five-month crackdown, which according to the U.N. has claimed the lives of as many as 3,000 people.

The SNC groups the LCC, an activist network spurring protests in Syria, and the long-banned Muslim Brotherhood, as well as Kurdish and Assyrian groups.