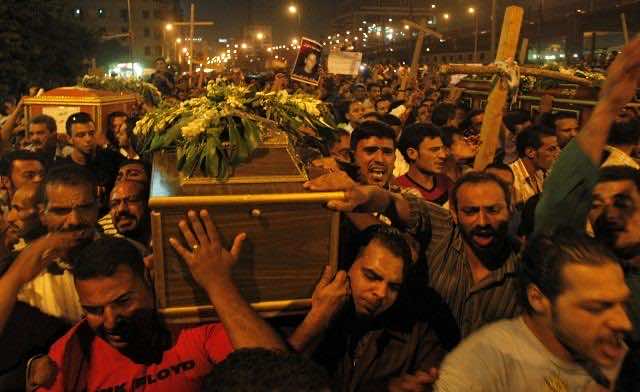 The Supreme Council of the Armed Forces (SCAF) “tasked the government with quickly forming a fact finding committee to determine what happened,” in a statement read on state television Monday as world leaders urged restraint.

It called for “all measures against all those proven to have been involved, either directly or by incitement.”

Both the ruling military council and the cabinet held crisis talks, a day after the clashes in Cairo left 36 dead, most of them Copts, and more than 300 people injured, according to health ministry figures.

The SCAF, which took power when President Hosni Mubarak was ousted in February, stressed it “continues to bear national responsibility to protect the people” until it hands over to an elected civilian authority.

Thousands of people attended a service at the Copt cathedral here late Monday for the funerals of 17 demonstrators.

Live television showed the coffins being brought in a procession from the Copt hospital in downtown Cairo where autopsies were carried out.

The coffins, each bearing the victim’s name and flowers arranged in a cross, were lined up in the cathedral for the funeral service before being taken out for burial.

“Now is a time for restraint on all sides so that Egyptians can move forward together to forge a strong and united Egypt,” he said.

“As the Egyptian people shape their future, the United States continues to believe that the rights of minorities ? including Copts ? must be respected, and that all people have the universal rights of peaceful protest and religious freedom.

“These tragic events should not stand in the way of timely elections and a continued transition to democracy that is peaceful, just and inclusive.”

A “deeply saddened” U.N. Secretary General Ban Ki-moon urged the Egyptian military authorities to defend “all faiths” in the country.

The Congregation for Eastern Churches at the Vatican slammed the “senseless violence”, with Cardinal Leonardo Sandri telling Vatican Radio he hoped it “would not lead as well to a climate of precariousness and difficulty” for Copts.

Copts had been protesting against an attack earlier this month on a church in the southern city of Aswan when the violence erupted.

“The Christian faith denounces violence. Strangers infiltrated the demonstration and committed the crimes for which the Copts have been blamed,” a Church statement said after Shenuda met 70 Church leaders.

“Copts have suffered repeated problems without accountability for the aggressors,” it said, calling on authorities to “solve the root causes of the problems.”

European leaders in Luxembourg expressed alarm at the Cairo clashes.

“It is very important that the Egyptian authorities reaffirm the freedom of worship,” British Foreign Secretary William Hague said.

“We can only call on the Egyptian government to get to the bottom of these incidents as soon as possible and bring those responsible to justice,” Chancellor Angela Merkel’s spokesman Steffen Seibert told journalists.

And EU foreign policy chief Catherine Ashton urged Egypt to move towards elections “with a desire to see all people part of those elections and to protect the people, whoever they are, wherever they come from, whatever belief and faith they have.”

A curfew was imposed overnight Sunday-Monday in parts of the Egyptian capital.

In a late-night address, Prime Minister Essam Sharaf appealed to Egyptians “not to give in to sedition” and warned the country was “in danger.”

At least five of the dead were mown down by a speeding army vehicle which swerved to hit protesters, a Coptic priest said, while an AFP correspondent saw bodies with gunshot wounds at the hospital.

The grand imam of Al-Azhar, Ahmed Tayyeb, the Sunni religious head, called for crisis talks between Muslim and Christian leaders “in a bid to contain the crisis,” state television said.

Some commentators warned of civil religious strife, but others said the clashes were fuelled not only by sectarian strife but also by anger towards the security services and the military council which succeeded Mubarak.

Users of social networking sites such as Twitter said the initial clashes outside the state television building on the Nile were provoked by “thugs” at the scene, while the broadcaster was accused of fanning anti-Coptic sentiment.

On Monday, the authorities announced the hanging of a man sentenced to death for shooting six Copts last year.

Copts complain of systematic discrimination, but since Mubarak’s fall, tensions have also mounted between the military initially hailed for not siding with Mubarak and groups which spearheaded the revolt.