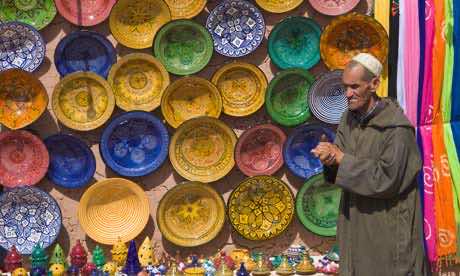 Morocco‘s high-speed train is emblematic of the flagship schemes King Mohammed VI has initiated since he came to the throne 12 years ago. Work has just started on the line, which will be the first high-speed train in an Arab country, and also in Africa. But with a population of 33 million, 40% of whom are illiterate and 15% of whom make do on $2 a day, the scheme is perhaps not a priority.

Criticism in the independent press has been severe, though Moroccan authorities say the train will streamline travel between the economic centres of Tangiers and Casablanca. They say Morocco is consolidating its position as a prime industrial power.

King Mohammed has always wanted to modernise, but times have changed. “With the economic crisis and the Arab spring Morocco can no longer boast about its prestige projects,” says political scientist Khadija Mohsen-Finan. One of the benefits of the Arab spring, she says, is to force the government “to stop putting up a pretence and to moralise, or at least rationalise, spending”.

With growth forecast to reach 4.7% this year, Morocco is weathering the global crisis, especially given its lack of oil and gas resources. But economists are cautious. “The first place to show signs of revolt was Tunisia, which had good growth. What matters is the redistribution of riches. Morocco has the biggest poverty gap in the Maghreb,” said economist Driss Benali.

Larabi Jaidi, a professor of economics in Rabat, endorses this view, saying inequality “is set to continue for a long time” and may well get worse.

In an attempt to contain protest, the government made concessions that included subsidies on essentials and a higher minimum wage.

With the budget deficit running at about 6% of GDP, Jaidi warns: “We will be footing the bill for the Arab spring for years to come.”