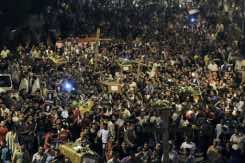 It was not immediately clear why Beblawi– one of two deputy prime ministers– resigned, but the announcement came after deadly clashes in Cairo that sparked furious condemnation of the leadership’s handling of the transition from Hosni Mubarak’s rule.