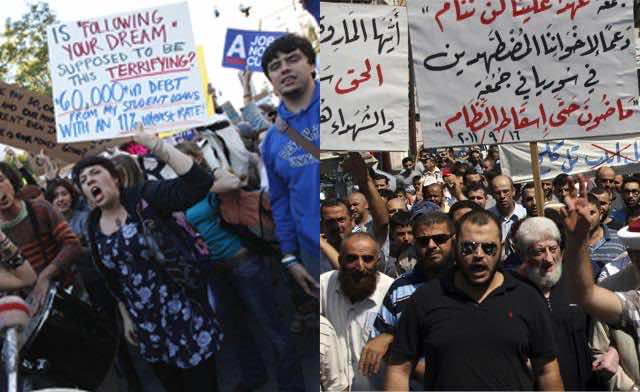 After the “Arab Spring” and unrest in Europe, New York’s “Occupy Wall Street” movement may be the latest sign of a global, popular backlash against elites with increasingly shared rhetoric and tactics.

On almost every continent, 2011 has seen an almost unprecedented rise in both peaceful and sometimes violent unrest and dissent. Protesters in a lengthening list of countries including Israel, India, Chile, China, Britain, Spain and now the United States all increasingly link their actions explicitly to the popular revolutions that have shaken up the Middle East.

The slogans on the streets of Manhattan and other U.S. cities also show a host of other intermingling influences, from the British student protests last year to the “indignados” (indignant) anti-austerity demonstrations in Greece and Spain.

What they all share in common is a feeling that the youth and middle class are paying a high price for mismanagement and malfeasance by an out-of-touch corporate, financial and political elite.

When hundreds of protesters blocked London’s Westminster Bridge on Sunday in anger at upcoming changes to Britain’s National Health Service, they took on slogans from U.S. protesters who describe themselves as the “99 percent” paying the price for mistakes by a tiny minority.

A global narrative of anger

With the economic outlook darkening just as the growth of social media helps disparate groups around the world knit together a global narrative of anger, there may be more to come.

“This is most definitely going to be a multiyear trend, perhaps even a decade,” says Tina Fordham, chief political analyst for U.S. bank Citi. “What’s interesting is the way you’re increasingly seeing these … strands come together. So far the policy impact has been minimal, but that could change. An extended period of low or no growth could galvanize these emerging movements into political forces.”

While those largely leaderless groups taking to the streets might be getting better at articulating what they are against, they still struggle to define what they actually want. But they are still gaining traction.

Already, the tactic of occupying a location – be it a park, the central square in an Arab city or a university common room – appears to be becoming commonplace, allowing debate and providing a focal point from which to engage the media and authority. So too are “days of rage,” a term first used during the Middle East risings, not to mention the use of social media and messaging systems to stay one step ahead of authorities.

When English student and occasional fashion blogger Jessica Riches, then 21, began posting twitter updates from a student sit-in at University College London late last year, her postings and online interactions inspired like-minded students elsewhere. That led to a string of other “occupations” across Britain and fueled further protests against planned tuition fee rises.

This didn’t stop the coalition government pushing through the reforms – part of a wider debt-reduction strategy – but now Riches feels she is seeing the beginnings of something more.

“There’s definitely something in the air,” she says, now avidly following events in New York online and encouraging activists in the United States to “occupy everything. In many ways, they remind me of us last year.”

What the Internet revolution is doing, some experts suggest, is leading to perhaps a new internationalization of political discourse. If nothing else, different protest trends around the world – many motivated at least in part by perceived economic grievance – may be producing a common narrative.

Clay Shirky, a professor at New York University and author of a 2008 book entitled “Here Comes Everybody,” which examines the social change wrought by the Internet, thinks something deep may be happening to the social psychology of a generation.

“If you look at what’s happened everywhere, there is some kind of psychological synchronization,” he told a meeting in Washington last month at the United States Institute for Peace. “There is a sense among young people that their generation is different. If enough of them behave like that … you might be seeing some kind of generational shift as happened in 1967.”

With hindsight, many of the Baby Boomers who protested in the West and Communist blocs in 1967-68 did not prove notably radical in the rest of their lives. Most settled into mainstream jobs, raised families and moved in a more conservative direction. But many wonder what might happen if the current economic downturn proves more profound and longer lasting.

Today’s protesters in the developed world tend to lack the ideological conviction of many of their predecessors. While they might declare themselves frustrated with mainstream politics, globalization and financial markets, there is little of the hankering of yesteryear for alternate ideologies.

“There’s enthusiasm for Marxist theory as a tool for analysis,” says Tim Hardy, author of UK-based blog “Beyond Clicktivism. “But I haven’t seen many calls for Marxist-style statist solutions. There is some interest in anarchist models, perhaps because they’re the only things that hasn’t been tried and failed. But there’s also just a lot of confusion.”

If anything, many of the new generation of protesters could be described more as “militant Keynesians” than anything else: favoring state stimulus, public works and controls to stem the unfettered movement of capital. More often, they appear to be coalescing around individual issues or demands.

UKuncut, for example, an officially leaderless group of which Hardy describes himself as a leading cheerleader and which has formed a U.S. offshoot, organizes flash mobs at businesses they accuse of avoiding tax through offshore dodges.

In contrast, rioters who ran amok through British cities for several days in August, largely a poorer, tougher, more inner-city group than the earlier student protesters, seemingly lacked purpose beyond a desire to flout authority and loot goods.

The Wall Street protesters, early indicators suggest, may come together around calls for financial regulation and tax reforms to redress a widening wealth gap. In doing so, they may end up accelerating trends already visible.

Last month, U.S. President Barack Obama echoed billionaire Warren Buffett in calling for America’s richest to pay more tax. Even before the protests, Goldman Sachs had lost around a quarter of its value in the stock market largely because of fears it might face a regulatory backlash.

But at the same time, the financial crisis and its aftermath has also helped fuel the rise in the United States of the right wing Tea Party with almost exactly the opposite demands – slashing back state intervention in the economy and society.

In the euro zone, a left-wing response against austerity in troubled borrowers in the Mediterranean south – such as Greece – is counterbalanced by the rise of Eurosceptics and right-wing parties in the fiscally more frugal north – Germany, Finland and other core EU states opposed to ongoing bailouts.

“What you’re seeing is a loss of confidence in institutions and their legitimacy because they are not seen as delivering,” said Jonathan Wood, global issues analyst at Control Risks.

“It’s hardly a surprise that it’s producing a degree of paralysis. Politics becomes very reactive and it’s hard to deal with the bigger issues.”

For the protesters of the Middle East dealing with the aftermath of revolutions or facing a sometimes bloody backlash from autocratic elites clinging to power, events in the developed world are all very interesting.

But for many, there are more pressing concerns than how they might fit into a wider global generational zeitgeist. “I think the bankers in the region are worried,” United Arab Emirates-based blogger Sultan Al Qassemi told Reuters via twitter. “But not the Yemeni and Syrian street, if you know what I mean.”