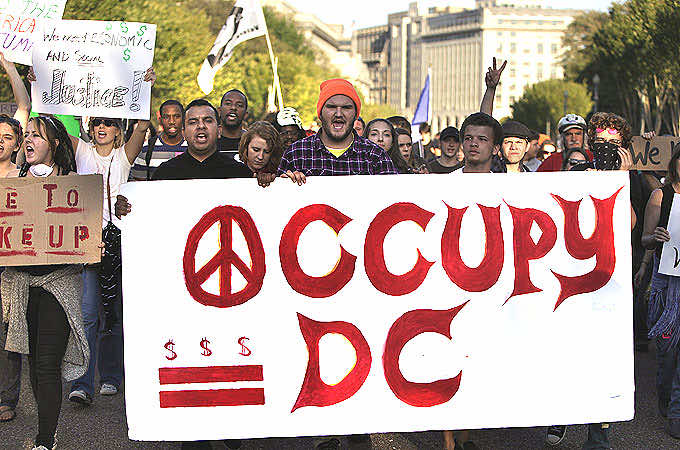 Police have arrested protesters attempting to occupy a US Senate building, as activists influenced by the “Occupy Wall Street” movement continue to rally in the nation’s capital.

Nearly 100 protesters on Tuesday morning marched onto Capitol Hill, the site of the Capitol building, and flooded the Hart Senate Office Building, where they unveiled two banners that read: “End War Now” and “People for the People”.

Protesters said that they wanted to shut down Congress until the Senate agreed to hear their demands.

While most of the protesters congregated in the building’s atrium, witnesses said that others stood on the buildings balconies chanting and waving banners.

Police moved quickly to disband the protest – arresting six participants and charging them with unlawful conduct.

The Capitol Hill protest was organised by the October 2011/Stop the Machine movement, an offshoot of the larger Occupy DC rally camped mere blocks from the White House and Capitol Hill.

The same group shut down Washington’s National Air and Space Museum on Saturday, when they swarmed the building in protest of a new exhibit on military drones.

According to Stop the Machine’s website, the movement is dedicated to “nonviolent resistance similar to the Arab Spring and the Midwest awakening” and has tasked itself with “ending concentrated corporate power and taking direct control of a real participatory democracy”.

Police arrested moer than 100 protesters from the Occupy Boston movement early on Tuesday after the group expanded its encampment.

“At 1:30 this morning hundreds of police in full riot gear brutally attacked Occupy Boston,” the group said in a news release, adding that authorities “made no distinction between protesters, medics or legal observers”.

Police said no protesters or police were injured.

“Civil disobedience will not be tolerated,” Thomas Menino, mayor of Boston, told a local news station on Tuesday.

Protesters’ tents have been set up in Dewey Square Park in downtown Boston all month, but on Monday expanded to a larger section of the nearby Rose Fitzgerald Kennedy Greenway. Many linked arms Monday evening in a show of solidarity on their expanded turf.

The “Occupy Wall Street” protests started on September 17 with a few dozen demonstrators who tried to pitch tents in front of the New York Stock Exchange. Since then, the movement has grown to include rallies in over 500 US cities.