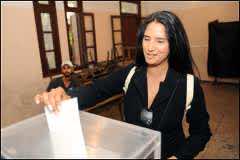 Morocco’s popular Islamist Justice and Benevolence movement on Tuesday called for a boycott of 25 November parliamentary polls called by the king in response to pro-democracy protests.

“We call on the Moroccan people to boycott this process based on lies and illusions,” the movement, which is not officially recognised but tolerated by the authorities, said in a statement.

“We also call on Morocco’s political, intellectual and economic elite to follow the February 20 movement, which is the movement of the people.”

The February 20 Movement, which takes its name from its first day of protest, was inspired by pro-democracy groups that have sprung up across the Arab world this year.

Tuesday’s announcement is the latest boycott call of the November polls. In September Morocco’s opposition Unified Socialist Party announced that it would boycott the election, joining two far-left parties.

Morocco’s parliamentary elections were due to be held in 2012 but were brought forward following a July 1 referendum in which voters overwhelmingly approved a package of reforms limiting the powers of King Mohammed VI.

The referendum and early elections were an attempt by the 48-year-old leader of the Arab world’s oldest monarchy to pre-empt protests inspired by the “Arab Spring”.

While critics argue that the new constitution short-changed the people’s democratic aspirations, the king remains popular and mass-street protests have subsided though the 20 February Movement continues to hold smaller demonstrations in cities.

In September it brought thousands of supporters—estimated by police at 5,000 and organisers at 15,000—into the streets of Casablanca for a demonstration to demand deep political reform.