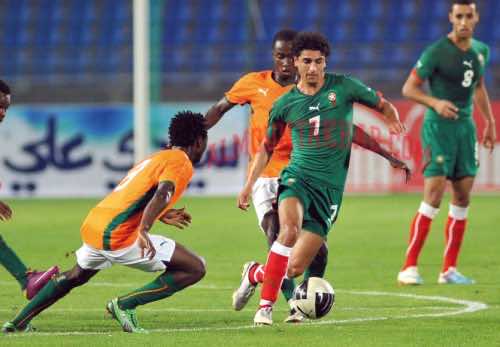 The Morocco U-23 team boosted their preparations for the CAF U-23 Championship with a 2-0 win over Cote d’Ivoire on Tuesday in Tangier, located in the northern part of Morocco.

The two teams were using the game to prepare for the continental qualifiers for the London 2012 Olympic Games next month.

Mokhtar Younes scored the opener on 25 minutes before Qasmi Yassine sealed victory with the second goal in the second half.

Morocco are housed in Group B alongside rivals Algeria, Nigeria and Senegal for the championship to be held from 26 November to 10 December, 2011 at a yet-to-be confirmed venue.

Group B has Cote d’Ivoire, Egypt, Gabon and South Africa.

The top three teams will qualify for the London 2012 Olympics and the fourth placed team taking on a side from Asia in a play – off.