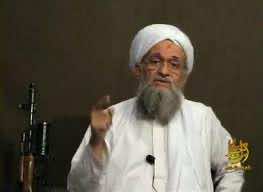 Al Qaeda leader Ayman al-Zawahri urged Algerians in a video released on Islamist websites on Wednesday to follow the example of Libyans and revolt against their leaders.

He also attacked military rulers in his native Egypt for maintaining close ties with Israel and doing nothing to back the Arab uprisings that brought down Tunisian leader Zine al-Abidine Ben Ali in January and Egyptian ruler Hosni Mubarak in February.

“Oh lions of Algeria! Look at your brothers in Tunisia and Libya when they cast their leaders into the dustbin of history,” Zawahri said. “So, why don’t you revolt against your despot?” he added, referring to president Abdelaziz Bouteflika.

Libyans managed to bring down ruler of four decades Muammar Gaddafi after protesters inspired by uprisings in Egypt and Tunisia transformed into an armed rebellion backed by NATO.

Algeria, which shares a long border with Libya, has so far not seen a popular protest movement like those that swept through other Arab countries.

Its neighbour Morocco held a referendum on constitutional amendments in an apparent effort to appease protesters and stave off a bigger movement.

“The Muslim nation across the world expects you to deliver a model of jihad and struggle by opposing the corrupt dictators,” Zawahri said, addressing Algerians.

Zawahri was named by the Islamist group to succeed Osama bin Laden after U.S. forces ended a decade-long worldwide hunt by killing him in an operation in Pakistan in May.

Al Qaeda has tried to wage war on the unpopular rulers over the past decade through creating cells that use suicide attacks on foreigners and government installations and officials.

But the Arab Spring has left al Qaeda on the sidelines looking increasingly irrelevant. Largely peaceful protests brought down veteran rulers in Egypt and Tunisia and struggles are continuing in Yemen as well as Syria.

Zawahri, an Egyptian surgeon by training, also praised August’s militant attack in southern Israel and said Egypt’s ruling military council had done nothing to stop Israel bombing Gaza afterwards or back Arab uprisings generally. He referred to Libyan rebels, who include many Islamists, as “our people”.

“I congratulate our brothers, the Mujahideen who carried out the two operations in Eilat (south Israel) and I pray for God to shower them with rewards,” he said.

Zawahri also urged the Egyptians to keep up pressure against the Israeli embassy in Cairo, which protesters stormed in September after Israel killed five Egyptian border guards during its Gaza operation, causing the ambassador to flee.

Zawahri was last seen in July in a video calling on Syrians to direct their protests against Israel and the United States as well as the government of Bashar al-Assad.

Zawahri’s whereabouts are unknown, although he has long been thought to be hiding along the border between Afghanistan and Pakistan. Washington is offering a $25 million reward for any information leading to his capture or conviction.