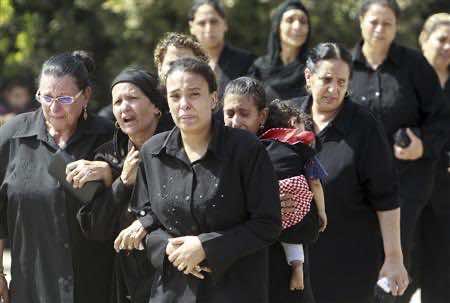 CAIRO – An Egyptian general appealed on Wednesday for unity between Christians and Muslims and denied that troops opened lethal fire during clashes between Christian protesters and military police that killed 25 and drew broad criticism of army tactics.

In the worst violence since Hosni Mubarak was ousted in February, armoured vehicles sped into a crowd on Sunday during a protest over an attack on a Coptic church. Online videos showed mangled bodies. Activists said some people were crushed by wheels.

“Egypt’s Copts are part of the fabric of this society. All Egyptians are citizens with the same rights and obligations,” said General Mahmoud Hegazy, a member of the army council that has ruled since Mubarak was deposed by a popular uprising.

“The power of the Egyptian people is in its unity. Egypt was never more in need of unity than it is now. The armed forces belong to the people, whether Christian or Muslim,” Hegazy told a news conference.

Amnesty International said some of the dead had bullet wounds. A doctor at a Christian hospital had told reporters on Monday that 14 of the 17 dead brought in to his hospital had been hit by bullets.

“The armed forces would never and has never opened fire on the people,” Hegazy said.

The army was praised when it took control after Mubarak was ousted for its restraint in handling protests. But anger at the military has mounted as the transition to civilian rule has dragged on and for what activists say are increasingly tough tactics.

“The martyrs who died in Maspero had Christians among them,” Hegazy said of the violence on Sunday in the neighbourhood of Cairo around the headquarters of state television.

Christians turned their fury on the army. They said protesters responded with stones and other projectiles only after the military used heavy-handed tactics. Military and other vehicles were torched in the violence.