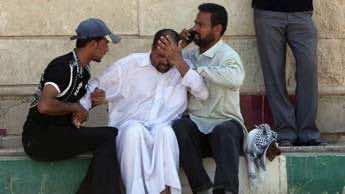 At least 15 people were killed and scores more were wounded in a spate of attacks Wednesday in Baghdad, officials said. Two apparently coordinated suicide car bombs targeted separate police stations in the capital.

Bomb and gun attacks in Baghdad, including two suicide car bombings minutes apart on police stations, killed at least 15 people and wounded some 68 others on Wednesday, security officials said.

Two suicide attackers detonated their explosives-packed vehicles at police stations in Hurriyah, in north Baghdad, and Al-Wiyah, in the centre of the capital, about 8:30 am (0530 GMT), interior and defence ministry officials said.

The interior ministry official said the two attacks killed 11 people and wounded 48, while the official at the defence ministry put the toll at 15 dead and 42 wounded.

Both officials spoke on condition of anonymity.

Another car bomb killed three people and wounded 11, including police, at Al-Ilam in southwest Baghdad, the defence and interior ministry officials said.

Baghdad’s Al-Yarmuk hospital received six wounded from the explosion in Al-Ilam, among them a police major, a medical source said.

Another car bomb in Hurriyah killed one civilian and wounded an Iraqi army brigadier, nine of his bodyguards and two civilians, according to the officials.

The defence ministry official said the brigadier’s first name was Sabah, and he was seriously wounded.

In other attacks, a magnetic “sticky bomb” wounded a police brigadier in Al-Sulaykh in north Baghdad, while two police were wounded by shots from a silenced pistol in the Jihad neighbourhood in south Baghdad, said the interior ministry official.

The apparently coordinated attacks were the worst to hit the capital since August 28, when a suicide attack blamed on Al-Qaeda at Baghdad’s biggest Sunni mosque killed 28 people.

Despite a decline in violence nationwide since its peak in 2006 and 2007, attacks remain common. A total of 185 Iraqis were killed in violence in September, according to official figures.