Morocco World News
Home News Middle-East ‘If you give the regime money, we won’t see it’ 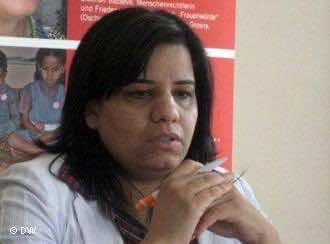 Forced marriages, physical abuse and genital mutilation are just some of the topics discussed on Girls Only Radio. Since 2008, the online station has been highlighting issues usually swept under the carpet in traditional Muslim societies. It now has 5 million listeners across the Arab-speaking world.

The station is the brainchild of Amani Eltunsi, a 27-year-old IT professional and graphic designer who used a private loan to get the idea off the ground. Deutsche Welle spoke with her about the challenges of breaking taboos and the possibilities for private citizens – and women in particular – to reshape society.

Deutsche Welle: Where did you get the idea for a radio station aimed explicitly at young women, and how did it start?

Amani Eltunsi: It started because I couldn’t find any real media talking about girls in Egypt and our problems. All they cared about was how to look pretty and other nonsense. We suffer from a lot of problems. So I started to think about how I could talk to a lot of women. I thought about a print magazine, but that would have cost too much, and it wouldn’t have reached my target audience. I wanted to get my message across to thousands of people. So I decided on the Internet and began researching online radio techniques there. Then I designed the website and uploaded it.

How many people listen in? How did you build your audience?

I advertised on facebook the first week, and I got 15,000 visits. In the first week. So I knew I was on the right track. In print, I would never have reached 15,000 people. Then a woman from Egyptian television called and said she wanted to do an interview with me. So I went on a famous Egyptian TV show, and that attracted a lot more people. And from 2008 to 2011, we now have five million subscribers to our website.

15,000 in the first week is a very impressive start. Do you credit facebook for that?

When people are thirsty for something, they want to drink. We are a media outlet for girls looking at issues that all girls are interested in. Egypt is a country of 80 million people, so 5 million isn’t all that big a proportion. We also use Google analytics to get people to contact us. The keywords I use are the ones every girl cares about.

So one key to starting off is knowing how the Internet works?

Yes. I graduated in computer science so I know the techniques.

About the content – what are you particularly aiming to get out in the open via your radio station.

A lot of things. For instance, one day I was driving home in my car, and I saw a man slapping a woman in the face. She was screaming, and no one was helping her. I stopped and asked her if she needed assistance. She couldn’t say yes. But she got in my car and I drove off quickly. She started to cry and said, “He’s my husband.” I didn’t know what precisely what had happened, but I told her she had rights and should go to the police station and tell them she was being beaten. And she said, “What are my rights? I don’t know my rights.”

Later I went on the Internet and found out that Egypt does guarantee some rights for women. But there isn’t a list, and people don’t know them. I called organizations and asked them to send me a list of women’s rights, but they didn’t care. And this is one of the things I deeply want to talk about.

Do you think the government purposely keeps women in the dark?

First, I think a lot of organizations just go about their routine jobs. Second, the regime in Egypt doesn’t have systems. All we know is that we have to pay taxes. Women’s rights aren’t advertised. So I started working on that, violence in marriage, everyday harassment and genital mutilation. We also talk about self-defense, self-help and how to be independent.

What do you think about the role of women in general in the Arab Spring?

Women suffer most from a lot of problems. After (former Egyptian President Hosni) Mubarak stepped down, women suffered a lot of harassment. It was like ‘Okay, now you’re not needed, so stay at home.’ It’s not easy for Egyptian women to protest. But we have to insist that the Egyptian regime sticks up for the rights of women.

Mubarak was a thief, but he did good and bad things. So what we have to do is keep the good things and add more of them. One good thing was the rule that women were allowed to get divorces. It’s also important that women are allowed to work in politics. Egyptian people have to learn to respect one another and other people’s points-of-view.

So look into the future, if you would. Will Egypt be a better place in 10 years’ time?

Yes. I’m optimistic. But we have a lot of economic problems, and when we have those, we don’t think about rights. For instance, I got a personal loan to start my station in 2008, but in 2009 it was cancelled, and I was forced to suspend a publishing house I had started. Economics is the basis of everything. But I think that maybe we can recover some of the money from the Mubarak regime. And I’d like to tell the world: If you want to help Egypt, don’t just send money. Fund specific projects. For instance, France helped us build Metro stations. Infrastructure is what we need. If you give the regime money, we won’t see it.