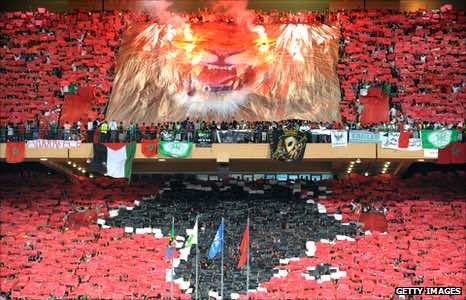 In an historic showing, three Maghreb teams qualified for the 2012 Africa Cup of Nations (CAN). Morocco, Tunisia and Libya will join 13 other squads in the continent’s premier football event, set to take place in Gabon and Equatorial Guinea early next year.

Morocco finished atop Group D after their 3-1 thrashing of Tanzania on Sunday (October 9th). Tunisia, meanwhile, defeated Togo 2-0 on Saturday to secure their place in the finals. Libya qualified as a best-placed runner up, despite playing all but one of their qualifying matches away from home due to the revolution.

No Maghreb team has won the CAN title since Tunisia in 2004. But this year many fans see that as a possibility, with the heavy hitters in African football coming up short. Egypt, Nigeria, South Africa and Algeria all failed to qualify for the finals. The tournament was first held in 1957 with just three teams, none of which were from the Maghreb.

While Algeria may be out of the competition, fans point to their success in aiding other Maghreb and Arab teams in the race to the finals. The Desert Foxes defeated Central African Republic 2-0 on Sunday, securing the Atlas Lions’ top spot in Group D, just ahead of Sudan, which reached the finals as a best-placed runner up.

The failure of three world cup teams and the presence of three Maghreb teams is a strange development in the race for the title. Moreover, if Algeria had played well from the beginning of these qualifiers, they would have been the 4th Maghreb team to make it to the finals.

Although Algeria didn’t qualify, national coach Vahid Halilhodzic was optimistic about the team’s prospects. “I’m very happy and proud of my players who looked like real lions in the field,” he said. “It’s true that we failed to qualify, but a new team will be born in the future.”

“This is only the beginning, and I’m sure that we’ll return to our past level,” Algeria captain Madjid Bougherra said.

Tunisia’s rout of Togo showed that the team remains strong after the revolution. The Carthage Eagles just came off a victory in the African Nations Football Championship for Locals in Sudan.

Like Tunisia, Libya’s revolutionaries also overcame their many failures in making it to the CAN finals. The Libyan football “victory” had sports and political gains as well, especially as the Libyans were denied the support of their fans during the remaining matches of qualifiers because of unstable conditions in the country.