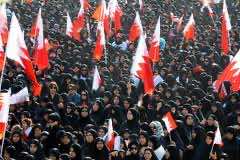 Bahrain opposition parties have pledged to continue using peaceful rallies and marches to campaign for democratic reforms, describing the Gulf Arab state as a police state no different to Egypt and Tunisia before the Arab uprisings.

The declaration issued Wednesday by five groups, including the leading Shi’ite group Wefaq and secular party Waad, said the ruling Al Khalifa family’s role should be “governing without powers” in a constitutional monarchy.

Unrest continues in Bahrain months after the ruling family brought in troops from Sunni allies Saudi Arabia and the United Arab Emirates to help crush a protest movement they said was fomented by Iran and had Shi’ite sectarian motives.

The government says the nightly clashes between police and Shi’ite villagers and other forms of civil disobedience are hurting the economy of the banking and tourism hub. Many firms have relocated elsewhere in the Gulf.

Twenty-one opposition, rights and online activists who led the protests have been convicted in a military court of trying to overthrow the system. Eight of them were sentenced to life imprisonment including Waad leader Ibrahim Sharif, a Sunni.

It called for a direct dialogue between the government and opposition parties with international guarantees.

King Hamad bin Isa organised a month-long “national dialogue” in July but Wefaq — which won 18 of 40 parliamentary seats in 2010 elections — was allotted a small portion of seats and walked out.

The dialogue led to a government reform of parliamentary powers to allow delegates more power to question ministers.

But the opposition demand an elected government and removing an appointed upper house, the statement said. Sheikh Khalifa bin Salman, an uncle of the king, is thought to be the world’s longest serving prime minister, occupying the post since 1971.

“In the presence of an unelected government under statesmanship of a single person for 40 years, some 80 percent of public land ended being controlled by senior members from the royal family and other influential figures,” the statement said, calling Bahrain a police state.

“The reality in Bahrain is no different from any non-democratic state, a copy of Ben Ali’s Tunisia, Mubarak’s Egypt and Saleh’s Yemen,” it said.

The government says that democracy in Bahrain needs to have a character that fits the region and does not have to match the systems in place in other countries.

“Any form of democratic government in Bahrain has to suit the nature and character of Bahraini culture and heritage,” a statement from the government’s Information Affairs Authority said this week.