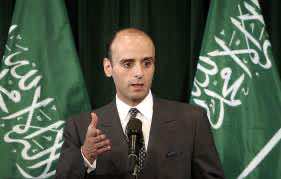 Saudi Arabia said on Thursday it was weighing its response to an alleged Iranian plot to assassinate its ambassador in Washington that has increased tensions between OPEC’s two top oil producers as the United States was considering further sanctions against Iran’s central bank.

Saudi Foreign Minister Prince Saud al-Faisal, on a visit to Austria, said the kingdom would have a “measured response” to the alleged plot. Iran called the accusations a fabrication designed to hurt its relations with its neighbors, Reuters reported.

Prince Saud said this was not the first time Iran had been suspected of similar acts, and condemned Tehran for trying to meddle in the affairs of Arab states. Asked what actions Saudi Arabia might take, he said: “We have to wait and see.”

U.S. authorities said on Tuesday they had uncovered a plot by two Iranian men linked to Tehran’s security agencies to hire a hit man to kill ambassador Adel al-Jubeir with a bomb planted in a restaurant. One man, Manssor Arbabsiar, was arrested last month while the other is believed to be in Iran.

Some Iran experts were skeptical, saying they could not see the motive for such a plot. Iran has in the past assassinated its own dissidents abroad, but an attempt to kill an ambassador of another country would be a highly unusual departure.

Iran has denied the charges and expressed outrage, saying the allegations threaten stability in the Gulf — where Saudi Arabia and Iran, the biggest regional powers, are fierce rivals and Washington has a huge military presence.

“The president and the king agreed that this plot represents a flagrant violation of fundamental international norms, ethics, and law,” the White House said in a statement issued by press secretary Jay Carney.

Earlier Carney told reporters: “We’re responding very concretely with actions we know will have an impact on Iran and will make clear this kind of behavior is unacceptable and will further isolate Iran.”

A senior Treasury Department official said Thursday that the United States is considering further sanctions against Iran’s central bank in response to the alleged plot to kill the Saudi ambassador on U.S. soil.

In prepared testimony, sanctions czar David Cohen said that additional sanctions against the Central Bank of Iran were on the table and that the country is now facing unprecedented levels of financial and commercial isolation, AFP reported.

“I can assure the committee, as Secretary (Timothy) Geithner said in his letter of August 29, ‘All options to increase the financial pressure on Iran are on the table, including the possibility of imposing additional sanctions against’” Iran’s central bank.

Former Iranian President Mohammad Khatami warned that officials in his country must avoid doing anything that might prompt action against Iran by western powers, saying “I am worried, as pretexts for campaigns against Iran are multiplying by the day.” His comments were carried by the Iranian opposition website Rahesabz.net.

Khatami has criticized Iranian President Mahmoud Ahmadinejad for rhetoric that has fueled tensions with western countries.

In Britain, Foreign Secretary William Hague told parliament the alleged plot “would appear to constitute a major escalation in Iran’s sponsorship of terrorism outside its borders.”

Relations between Saudi Arabia and Iran soured after the 1979 revolution that brought Shiite Muslim clerics to power on the other side of the Gulf. Sunni Saudi Arabia and Shiite Iran consider themselves protectors of Islam’s two main rival sects.

The rift sharpened this year after Saudi Arabia deployed troops to the Gulf island kingdom of Bahrain to crush a Shiite-led uprising there.

Saudi Arabia has also accused Iran of fomenting violence in its own Eastern Province, where the kingdom’s Shiite minority is concentrated.

In a particularly strong-worded statement, Saudi Arabia’s official SPA news agency quoted an un-named official source as condemning what it called “the outrageous and heinous” assassination plot and said the kingdom.

“The kingdom, for its part, is considering decisive measures and steps it would take in this regard to stop these criminal actions and to decisively confront any attempt to undermine the stability of the kingdom, threaten its security and spread sedition among its people,” the statement said.

On Wednesday, Saudi Prince Turki al-Faisal, a former chief of Saudi intelligence, said there was overwhelming evidence of Iranian official involvement in the plot.

“America wants to divert attention from problems it faces in the Middle East, but the Americans cannot stop the wave of Islamic awakening by using such excuses,” Larijani said in an open session of parliament.

Prince Saud said all information Saudi Arabia has indicates that Tehran was responsible.

“It is not the first time Iran has done something like this in order to mix itself up in Arab affairs,” Prince Saud said, adding that a similar attempt was made in Kuwait, where a group suspected of planning an attack was arrested.

“Iran must understand there is only way for international cooperation between countries — and this is through the respect and adherence to international laws and people’s rights.”

The alleged plot was revealed shortly before Saudi Arabia said King Abdullah, believed to be 88, would in coming days undergo surgery in Riyadh for a back problem.