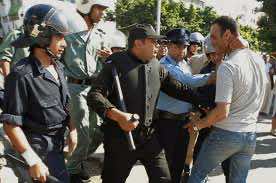 A member of Morocco’s pro-reform February 20 Movement died Wednesday in an early morning protest when he fell from a roof after being manhandled by police, witnesses told AFP.

“Mohammed Boudouroua, 38, died when he fell from the roof of a building housing the employment agency (ANAPEC), pushed by a policeman” who was trying to dislodge him as he took part in a sit-in, said Hakim Sikouk of the Moroccan Association of Human Rights.

Sikouk said he was at the morgue at Safi, about 150 kilometres (93 miles) south of Rabat, with Boudourouaj’s family, who were demanding an inquest.

A local police source confirmed the death of the protester, part of a group of unemployed graduates, but claimed Boudouroua had “threatened to set himself alight”.

He then “threw himself from the roof of the building where he had been holding a sit-in with his comrades for two days,” the source added

But witnesses said police pushed Boudouroua, who fell on his head, and arrested three others who they questioned and then left on the road north of Safi.

Boudouroua, who held seven technical diplomas, was a member of a group aligned with the February 20 movement, holding regular protests to demand the right to work.

The February 20 movement, inspired by popular uprisings that toppled the leaders of Tunisia and Egypt, was named after the date of Morocco’s first nationwide protest in a series of demonstrations this year.

King Mohammed VI has since pledged major reforms including a strengthening of the independence of the judiciary and separation of the government and royal house.