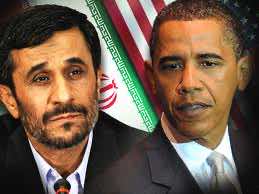 U.S. President Barack Obama warned Iran on Thursday it would face the toughest possible sanctions for an alleged plot to kill the Saudi ambassador to Washington, as officials eyed action against its central bank.

Saudi Arabia on Thursday accused Iran of fomenting instability but pledged a “measured response” over the alleged plot that has heightened tensions between OPEC’s two top oil producers.

Saudi Foreign Minister Prince Saud al-Faisal said, on a visit to Austria, that the evidence showed “Iran is responsible” for the alleged plot and said Tehran had tried to “meddle” in the affairs of Arab states before.

In Washington, Obama told a news conference that the United States would not take any options off the table in dealing with Iran, a phrase U.S. officials regularly use towards Tehran that is diplomatic code for the possibility of military action.

“This is part of a pattern of dangerous and reckless behaviour by the Iranian government,” Obama said in his first public comments on the affair.

U.S. authorities on Tuesday said they had broken up a plot by two men linked to Iran’s security agencies to assassinate Saudi Ambassador Adel al-Jubeir. One was arrested last month while the other was believed to be in Iran.

Iran called the accusations a fabrication designed to hurt its relations with its neighbours.

The U.S. Treasury Department said it was weighing more sanctions against Iran’s central bank to tighten the financial screws and deepen the country’s estrangement from the international financial community.

Obama came to office in 2009 promising to seek diplomatic engagement with Iran.

But his outreach failed to halt Iran’s nuclear advances and he has instead spearheaded several packages of international sanctions. The plot raises tensions to a new level between the Obama administration and Iran, which says its nuclear work is peaceful and aimed at generating electricity.

Obama told reporters during a news conference with South Korean President Lee Myung-bak the United State would continue “to apply the toughest sanctions and continue to mobilise the international community to make sure that Iran is further and further isolated and pays a price for this kind of behaviour.”

“Now, we don’t take any options off the table in terms of how we operate with Iran, but what you can expect is that we will continue to apply the sorts of pressure that will have a direct impact on the Iranian government until it makes a better choice in terms of how it’s going to interact with the rest of the international community,” Obama said.

‘RULES OF THE ROADS’

U.S. financial institutions are already generally banned from doing business with any bank in Iran, including the central bank. But the U.S. Treasury said more action, if it had international support, could further isolate the institution.

The White House has persistently sought to highlight the disparity between Iran’s support for popular uprisings against other autocratic regimes in the region and its brutal treatment of protesters at home, and Obama repeated this message.

“We will continue to work to see how we can bring about a Iranian government that is actually responsive to its people but also following the rules of the roads that other countries and the international community follow,” he said.

Iran denied the charges and expressed outrage at the accusations.

“The goal is pretty clear — they want to throw up problems, break good relations and foster instability in international relations,” he added. “It hurts us very much. Iran is one of our neighbours, it is an Islamic land, and we had never thought that Iran could take such a step and plan such an attack.”

Asked what actions Saudi Arabia might take, he said: “We have to wait and see.”

Iran meanwhile painted the accusation as a plot to create rifts between the two Middle East powers.

“We have no problem with Saudi Arabia. … Though our interpretation of regional developments are different … I hope Saudis are aware of the fact that our enemies do not want us to have convergence and cooperation,” Iran’s Foreign Minister Ali Akbar Salehi told state radio on Thursday.

Some Iran experts were sceptical about the plot, saying they could not see the motive for such an assassination. Iran has in the past killed its own dissidents abroad, but an attempt to target an ambassador of another country would be a highly unusual departure.

Iran said the allegations threaten stability in the Gulf — where Saudi Arabia and Iran, the biggest regional powers, are fierce rivals and Washington has a huge military presence.

Russia, which built a nuclear power plant for Iran, expressed concern over reports of the alleged plot.

The reports “have been treated with concern in Moscow,” Russian Foreign Ministry spokesman Alexander Lukashevich said in a statement late on Wednesday.

Russia has used pressure on Iran as a diplomatic tool in its relations with Washington, which have improved in recent years.

Relations between Saudi Arabia and Iran soured after the 1979 revolution that brought Shiite Muslim clerics to power on the other side of the Gulf. Sunni Saudi Arabia and Shi’ite Iran consider themselves protectors of Islam’s two main rival sects.

The rift sharpened this year after Saudi Arabia deployed troops to the Gulf island kingdom of Bahrain to crush a Shi’ite-led uprising there.