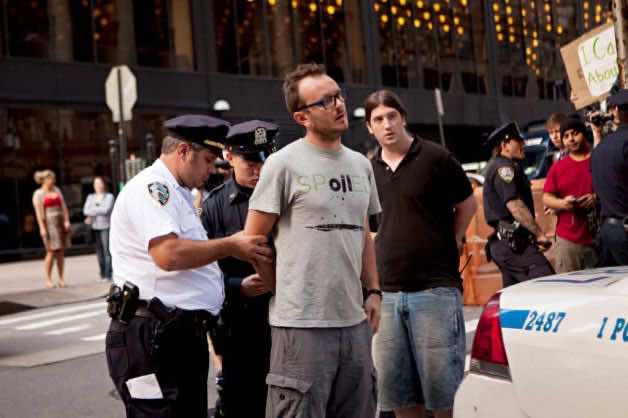 On Wednesday, Mayor Bloomberg of New York City, himself, informed protesters of the Occupy Wall Street movement in Zuccotti Park that they would have to leave Friday morning while the park is cleaned. Afterward, according to the Mayor, the protesters would be able to return. The clean up is scheduled for 7 am, but demonstrators have vowed they will not leave.

The City’s decision follows almost four weeks of the occupation of the park by protesters, upset about the country’s income inequality and a political system that seems to be dominated by the political contributions of special interests. It, also, follows a letter recently sent by the park’s private owners to the City claiming the park needs to be cleaned. According to the owners, Brookfield Office Properties Inc., it usually cleans the park each weeknight, with power-washers. But since the presence of protesters last month, they have been unable to carry out this maintenance.

There is one caveat, however, about Bloomberg’s guarantee that the Occupy Wall Street protesters will be able to return. This is the condition that they abide by the rules of the Zuccotti Park owners. While City zoning laws require that the park is made available to the public 24 hours, rules distributed by police the last two days prohibit items such as sleeping bags, tarps and storage of private property. It is not yet clear how long these regulations have existed, although the NY Times described these as “new rules”. In addition, it has been reported that following the clean up, all people entering the park will be screened to make sure they do not possess such items.

The rules will clearly make it impossible for the movement to continue to function as it has over the past weeks. The protesters’ encampment has not only provided a powerful symbol that has spurred protests across the country. It has facilitated the movement’s ability to plan protests and educate and exchange ideas about the country’s current problems. For example, protesters have set-up a library, operate websites, convene what they call General Assembly meetings, create signs and discuss with each other issues afflicting the United States. There even exists a Sanitation Working Group.

“This situation is not in the best interests of the protesters, residents or the city,” Deputy Mayor for Operations Cas Holloway said, who also described conditions at the park as “unsanitary.” The protesters responded by promising to clean the park and have been active all day and evening doing so.

If Egypt’s Mubarak had only waited a few weeks to remove protesters occupying Tahrir Square in order to clean up the public space instead of using his stone-throwing toughs, would Bloomberg have supported the Egyptian leader dispersing demonstrators? When the Mayor in his press statement says that “free speech rights…do not include the ability to infringe on the rights of others,” referring to concerns about city residents being able to use the park, Mubarak could have made the same argument about ensuring space for Tahrir Square shoppers and motorists.

US citizens have the right to freedom of assembly and expression. It’s provided for in the First Amendment of the Constitution, which should trump park rules that have recently been drawn up. Is the Mayor, and other city officials suggesting that if Americans want to express their grievances that citizens follow the established channels available to them? Running for public office in the United States or supporting candidates today requires raising vast sums of money. Attending a dinner with the President when he is in town costs $35,800 per plate. The coming presidential election will require candidates to raise $1 billion to run a campaign. This is keeping the politicians closely vested and working for the wealthy special interests, opposed to the general public good. It’s this means of recourse that are part of the reason protesters have mobilized.

They could apply for permits in hopes to organize daily rallies or set-up in city parks. The latter will inevitably be denied (for example City parks are closed at the latest by 1 am). Occasional rallies have already proved fruitless. Without these permits, are demonstrations supposedly not legitimate? The Civil Rights Movement in the 1950s and 60s should make Bloomberg realize that the granting of a permit does not bestow the legitimacy and right of demonstrators to assemble. Southern municipal governments were not very inclined to provide permits for marchers 50 years ago. The protesters who have assembled in Zuccotti Park have finally started a discussion across the country about problems that have been obvious for at least the last ten years, but which have been largely ignored.

Later today the major media will criticize protesters who it has frequently been dismissive of. Members of the press will point out the unreasonableness of protesters, such as their objections to leave the park in order for it to be cleaned, or to not follow the rules forbidding sleeping bags, among other items. It can be taken heart that the City’s tactics are really nothing that original. When Spanish indignados set-up camps in city centers in Madrid and Barcelona earlier this year, the authorities tried to make them leave, claiming the encampments had to be cleaned, having been beset supposedly by bed-bugs. The move only seemed to generate more support for the demonstrators.

If the Mayor was concerned about the ills inflicting the country, he would be glad these protests have started and would try to facilitate them. If the last couple of years have shown anything, it seems that this type of movement is about the only way the United States might reverse a long list of negative trends.