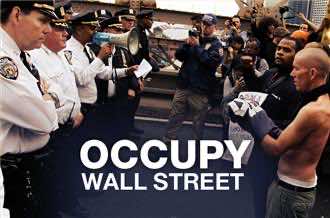 Showdown feared at site of ‘Occupy Wall Street’ camp as protesters say planned clean-up is a ruse to evict them.

Anti-Wall Street protesters are preparing to block efforts to clean up the Lower Manhattan park that they have occupied since September 17.

The move has raised fears of a possible showdown with authorities as the clean-up gets under way on Friday at Zuccotti Park, where hundreds of protesters from the Occupy Wall Street movement are camping.

Brookfield Office Properties, the private owner of the publicly accessible Zuccotti, plans to start cleaning at 7am (1100 GMT).

It said conditions at the park were “unsanitary and unsafe,” with no toilets and a shortage of rubbish bins.

Protesters fear the clean-up is an attempt to shut down the movement and have accused Michael Bloomberg, New York’s mayor, of being behind the move.

“Be warned, this is a tactic that Bloomberg has used to shut down protests in the past, and a tactic used recently in similar protests throughout Europe,” protest organisers said on a Facebook page.

Occupy Wall Street has called on protesters to “defend the occupation from eviction” on Friday.

There are also plans for global rallies on Saturday in 71 countries, according to Occupy Together and United for Global Change.

‘Occupy’ protests are occurring already across many US towns and cities. Early on Friday, police moved to disperse protesters camped in a park near the Colorado state capitol building.

The Denver Post newspaper estimated that hundreds had defied a police deadline to leave the park by 11pm local time on Thursday.

In a tweet, the Occupy Denver group said: “We must remain strong! They can take away our camp tonight, but we have grown stronger in light of this violation.”

In New York, Brookfield said the clean-up was necessary as neighbours at Zuccotti Park had complained of lewdness, drug use, harassment and offensive odours from the protesters.

Brookfield representatives, escorted by police, handed out notices to the protesters on Thursday to tell them that the park would be cleaned in three stages and would re-open for public use consistent with park regulations.

But the rules ban camping, tents or other structures, lying down on the ground, placing tarpaulines or sleeping bags on the ground and the storage of personal property – everything the protesters have been doing since they set up.

“Brookfield respects the rights of free speech, assembly, and peaceful protest,” the company has said in a statement.

Police said they would be on hand to ensure public order, but it is up to Brookfield Office Properties to enforce the rules of its park. Police will only become involved if laws are broken or if an official complaint is made by the park owners.

Protesters are upset that the billions of dollars in bank bailouts paid out during the recession allowed banks to resume earning huge profits while average Americans have had no relief from high unemployment and job insecurity.

They also say the richest one per cent of Americans don’t pay their fair share in taxes.

Hundreds of people have been arrested at rallies in New York and police have used pepper spray. Dozens have also been arrested during the past couple of weeks from Boston and Washington DC to Chicago, Austin and San Francisco.

Solidarity rallies have also sprung up at more than 140 US college campuses in 25 states, according to Occupy Colleges.