By Mouna Sadek and Lyes Aflou 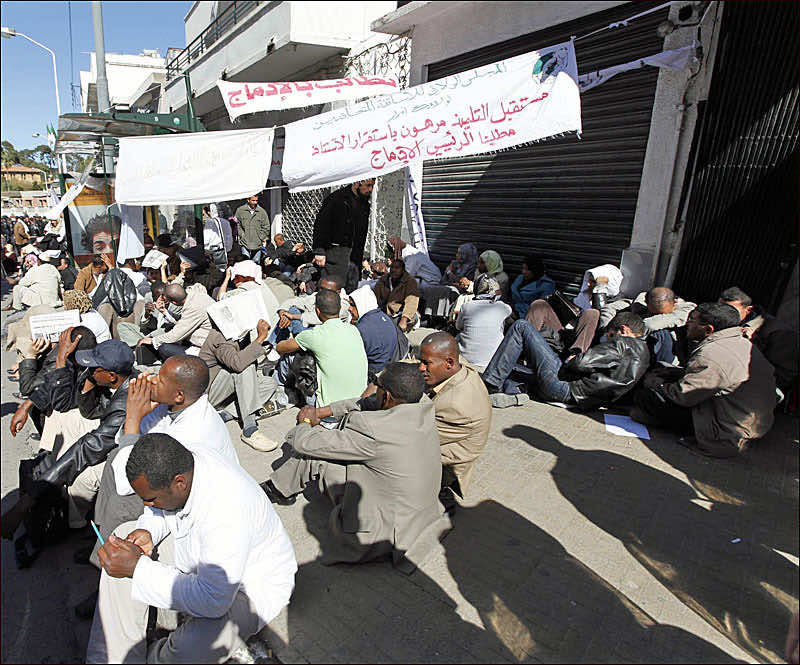 By Mouna Sadek and Lyes Aflou

The government announced a planned Algerian wage increase on September 30th, though many remained unsatisfied.

The unions began their strikes on Monday (October 10th) to press for pay hikes and a premium estimated at 50% of their salaries. They described their action as a success, saying that almost all of their members had taken part.

According to CNAPEST (National Independent Council of Secondary and Technical Teachers) Secretary-General Nouar Larbi, the rate of participation was 80-100% in Algiers, 95% in Annaba, 90% in Mascara and 60% in Setif.

“This huge level of participation is a reality, not a fiction,” said SNAPEST (National Independent Union of Secondary and Technical Teachers) Secretary-General Meziane Meriane.

The protest movements have been “motivated by the desire to see socio-professional conditions improve for workers across the sector”, according to Meriane.

Official sources painted a different picture. Only 27% of primary school teachers and about one-third of secondary and middle schools instructors took part, APS quoted a source from the education ministry as saying.

“The strike called by the independent unions is unjustified, especially since the government has responded favourably to almost all of the main demands made,” the same source added.

The unions, however, were not convinced, saying that the government failed to deliver on its promises.

Education Minister Boubekeur Benbouzid did not respond to teachers’ demands after working meetings in August and September, which “further discredited officials at the education ministry and by association the government they represent”, CNAPEST said in a statement.

The ministry last Sunday announced a raise in the qualification premium from 25% to 40% and promised to introduce new premiums as well. Other measures to help the workers include bonuses for laboratory and administrative staff. It was also announced that a premium of 15% of primary pay, known as the school support and remedial class premium, would be paid to teachers at all national education establishments and backdated to January 1st, 2008.

Unions, however, maintained that the announced steps fell short of their demands, which also relate to housing, retirements and benefits.

Meanwhile, Algerian doctors vowed to stage their own protests. The National Union of Public Health Practitioners (SNPSP) will meet on October 14th-15th to co-ordinate their labour actions. According to SNPSP member Mohamed Yousfi, medical workers will vent their indignation at the fact that the minister in charge of their sector has not honoured the commitments made in May.

Algiers police last Sunday arrested 20 activists from the National Committee for the Rights of the Unemployed (CNDDC) as they attempted to stage a protest near the presidential palace in Algiers. The rally was called to demand the creation of jobs and the expansion of unemployment benefits.

Communal workers are also planning to rally for their rights. The three-day Communal Workers’ Council (CNSC) strike is set to begin on October 23rd, with the main event planned for October 24th in Algiers outside the Government Palace.

“We are asking the public authorities to open negotiations so that the CNSC can be involved in the development of the special status and allowance system for communal workers,” union representative Yahia Ali told Magharebia.

As the social crisis unfolds, parents raise concern over their children’s education. Khaled Dahleb, the head of the Association of Schoolchildren’s Parents, said that teachers’ demands are legitimate and called on President Abdelaziz Bouteflika to put an end to the crisis.

Nevertheless, he regretted that children had become “hostages in this conflict” and hinted that teachers’ unions should have listened to his organisation and waited for some time to see whether the talks with the government would succeed.