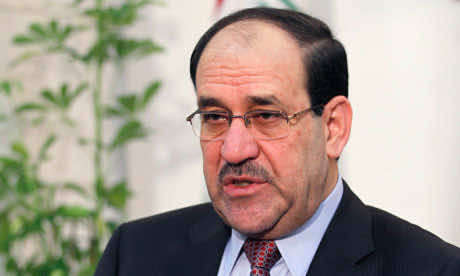 By facilitating a dysfunctional coalition driven by suspicion in Baghdad, Kurdistan has been able to further its own ambitions.

Keep Baghdad weak and sustain political divisions – that is the Kurdish strategy for Iraq, underpinned by an astute game of manipulation and patience.

Arab Iraq remains divided and the Baghdad coalition government is dysfunctional. Disputes over territory, natural resources and power-sharing, including the implementation of key legislation, and ongoing security problems stand in the way of enduring stability and progress.

The stable Kurdistan region, however, is moving ahead, despite being at the centre of these disputes. It garnered enough votes during the March 2010 parliamentary elections to position itself as a kingmaker, since top vote-winners Ayad Allawi and the prime minister Nouri al-Maliki struggled to form a coalition independent of the Kurds.

After nine months without leadership and amid continuing terror attacks, Arab Iraq finally got a government – but only because the Kurdistan president, Massoud Barzani – having kept everyone guessing as to which individual the Kurds were going to back – brokered an agreement that paved the way for a coalition of Iraq’s major political blocs.

Yet, that agreement never came to fruition; Allawi and Maliki failed to come to agreement over the distribution of power. Through the allocation of ministries, however, just about enough was done to appease various segments of Iraq’s political spectrum, including key Sunni-Arab politicians who contested the elections alongside Allawi but, as a result of their new-found status and prestige, refuse to heed any calls to withdraw and go into opposition.

Arab Iraq was thus given a fragile and dysfunctional government, and the Kurds facilitated this, ensuring that a government of national unity was actually a government of unlikely bedfellows driven by suspicion. The politics is still divided along sectarian lines: hostility exists between the Shia Dawa party of Maliki and powerful politicians belonging to the Sunni-Arab dominated Iraqiyah bloc, who remain wary of his grip on power and suspicious of his and other Shia blocs’ links with Iran.

That works for the Kurds. It keeps Baghdad weak and unable to move forward. It allows them to exploit tensions to further their own ambitions. For example, when Baghdad recently moved to revise an earlier version of an oil and gas law to the detriment of the Kurds, the Kurdistan regional government recalled Kurdish officials in Baghdad and, at the same time, invited Maliki’s foe, Allawi, to Erbil for emergency talks.

That response was aimed at exerting pressure on Maliki and his government, and the Kurds may be winning: the revised law is now unlikely to be approved and the Baghdad oil and gas licensing round, scheduled for January 2012, has been postponed. Similarly, while Baghdad may be adamant that the Kurds will never get oil-rich Kirkuk, the issue, unresolved, provides the Kurds with a powerful bargaining chip that allows them to push for other objectives in the meantime.

This includes objectives related to their own energy sector. Kurdistan is establishing itself as an industry champion, hosting the world’s oil and gas players at a forthcoming oil and gas conference in Erbil. For the event organisers, CWC, this is a first; their previous conferences focused on Iraq as a whole – not any more, though.

That is because the region is attracting major players, evidenced none other by former BP chief Tony Hayward’s $2.1bn deal for oil assets in the region. Around 40 foreign companies from 17 different countries are committed to investing some $10bn in the energy sector.

But does Kurdistan need Iraq? Iraq has control over pipelines that allow for oil to be exported more efficiently. Exporting oil via tanker trucks, although inefficient, is still feasible, but at some point a pipeline will be needed if Kurdistan is to become a viable exporter able to manage its huge reserves. So far, though, Kurdish energy ambitions have not been impeded by Baghdad’s control of the pipelines and its messy politics.

Baghdad also provides additional revenues, which allow for better basic services, infrastructure, education and a better equipped military – for the Kurds. In addition to their own resources and revenues – which Baghdad is unable to audit and benefit from – the KRG gets 17% of the annual Iraqi budget, worth, at the very least, almost $10bn a year.

Ultimately, it is about keeping any enemies in the making close; that is, have a foot in Baghdad, be aware of behind-the-scenes developments and have constant access to the political elite, providing an opportunity to promote regression.

Of course, the Kurds do not have to be part of Iraq and could declare independence tomorrow. There is little that Turkey and other neighbours like Iran could do, given their billions of dollars worth of trade with Kurdistan, domestic problems and the general volatility in the region, as well as the impossibility of invading and occupying Kurdistan’s cities.

However, the Kurds will not declare independence because they have a good thing going for them. It makes little sense to sacrifice this when any unilateral declaration of independence would put them “in the wrong”, perhaps land-lock them and justify counter-responses from Baghdad and regional neighbours.

Instead, they want to declare independence as part of a sustainable and regional framework, and so long as this framework gives them Kirkuk. In the meantime, the Kurds will continue to operate in the interests of the Kurds and Kurdistan, and that means exploiting Baghdad for all it has got – a price Iraq and Iraqis have to pay to keep the country intact.