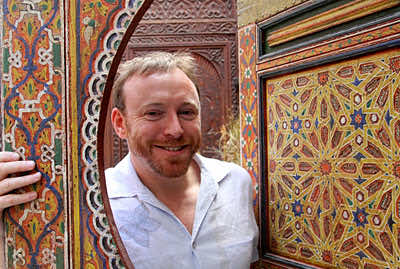 Dynamic is the word that springs to mind when meeting John Twomey. The night after holding a huge party, he is hosting a large dinner at his new guest house in the Fez Medina, Riad Idrissy and is on the phone to London with a contractor about installing a kitchen in his new restaurant there. Meanwhile he is also monitoring what is going on at the 250 year old pub he already owns. In between juggling all this, he is regaling his guests with jokes too risque to be recounted. At 41 years old, Irishman Twomey is making the most of his event-filled life.

“There are two ways of living – vegetating and getting on with it,” he says. Naturally, he is passionately aligned with the latter group. “I am aware of the length of time I’ve got left, so believe you should live everyday like it is your last.”

Born in Dublin, Twomey spent twenty years fencing for Ireland – for a decade he was the National Fencing Champion. “I’ve lived in Germany, Spain, Estonia, Hungary and spent a lot of time in France,” he says. Along the way, he picked up a bevy of languages, including Russian and Estonian. Then he got involved in starting a bank, “so I was able to enjoy careers in banking and fencing hand-to-hand”.

But when he moved to London in 1996, he went off on another tangent altogether. Twomey fell in love with the Ten Bells pub in Spitalfields, an old area of the city  notorious for the Jack the Ripper murders. The heritage-listed Ten Bells was built in 1753 and had previously been run by Jamie Oliver’s grandfather.

“Restoring the pub was good training for a 500 year old building in Fez,” Twomey says. 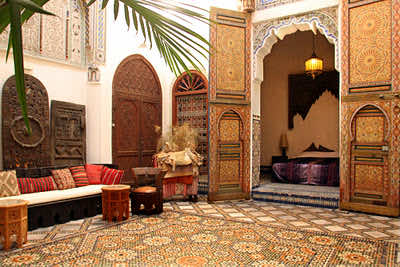 Twomey first came to Fez on an exploratory trip with Mike Richardson, the proprietor of the renowned Cafe Clock in Fez and Scorpion House at Moulay Idriss. By the end of their first weekend, both had purchased properties.

It’s taken six years to restore Riad Idrissy to a high standard. Complementing the traditional painted wood and intricate plaster carving that are a significant feature of the interior, are an eclectic collection of objects from around the African continent.

The guest house, which has just opened, has four guest rooms with ensuites. Twomey has bought a bit of London luxury to Fez, with heated towel rails and anti-fog mirrors. “You can come for the weekend and spend it in one of our bathrooms,” Twomey quips.

A distinctive feature of the property is the ruined riad behind the grand traditional house. When Twomey puchased the site, it was under several metres of rubble. When cleared, this revealed tiled floors and Pompeii-like remants of walls. Riad manager, Robert Johnstone – who worked in senior roles at prestigious London restaurants The Ivy and The Wolseley – has converted this area into a delightful garden, where meals can be served.

Twomey clearly has a talent for creating situations that bring people together. Riad Idrissy promises to be both a retreat and a place where many more enjoyable gatherings will be held.

First Published at The view From Fez