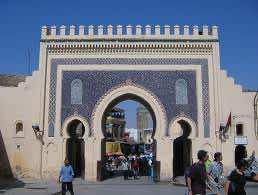 The old city of Fez dates back more than 1200 years; it has been the symbol of conservatism, traditions and authenticity. Today, it is introduced to the global market which to some extent makes its identity blurred. Aspects of globalization are seen everywhere.

Globalization according to Thomas Friedman, is the integration of capital, technology, and information across national borders, in a way that is creating a single global market and, to some degree, a global village.[1] Globalization is mostly defined as a “borderless world,” Bryan Turner in his book Globalization East and West (2010) argues however that “the world is only borderless for the privileged few, but for the great majority of humanity it is a tightly bordered and highly regulated world.”[2] This statement is true to some extent, but in the case of pirated Hollywood films, they are easy to get and available to all in the old Medina of Fez. CD sellers are found everywhere, selling the latest films (mostly in French) to the Moroccan customers. Turner quotes Moore saying that “The life of the individual anywhere is affected by events and processes everywhere.” (Moore, 1966: 482).

“Globalization” in this framework refers then, to the process by which the “world becomes a single place” (Robertson, 1992), and hence the volume and depth of social interconnectedness are greatly increased. Globalization can also be seen as the compression of social space according to Giddens (1990). His definition of globalization was influenced by the so-called “spatial turn.”[3]One feels that these Hollywood films do not belong to that space; they disturb and intrude on its authenticity. It’s like pieces of the whole world all jump into a place where they do not fit, and the irony is that the seller is a Moroccan. It is this Moroccan who becomes the vehicle for bringing these global products into the streets and shops of the Medina.

Friedman counters this argument stating that “…globalization is in so many ways Americanization: globalization wears Mickey Mouse ears, it drinks Pepsi and Coke, eats Big Macs, does its computing on an IBM laptop with Windows 98. Many societies around the world can’t get enough of it, but others see it as a fundamental threat.”[5]In my point of view, globalization does not necessarily mean Americanization; America just happens to have more influence on the globe at this time. On the other hand, America itself is introduced to global elements such as Asian Restaurants and the famous Sushi bars that are everywhere in the country.

Globalization can have serious effects on the local culture and identity. Hollywood films for example might have a dangerous influence on the morals and behaviors of Moroccan teenagers. Moreover, it has an impact on the space of the Medina; it profanes the sacred space of the Medina. This can be seen in a whole shop of films with lewd images that cover the wall facing the Bouananiya mosque. Turner supports this idea as he writes that “The processes of globalization, including its often negative consequences, have appeared to be inevitable and all-embracing. No society, however small and remote, could escape entanglement with such global cultural, political and economic processes.”[6]

Globalization could lead to the transformation of the society changing the practices and shaping the values to fit within the global culture. For Anthony Giddens, globalization “is really about the transformation of space and time.”[7] Obviously the space of the Medina is transformed, the scene of CD shops everywhere would have never been observed a decade ago. Today, however, it has become normalized to look at such profane images on the covers and even buy films from these shops, whereas a decade ago people would have been highly offended by the very same movies. Globalization shapes people’s everyday life, “their mentalities, habits, values, preferences, choices and actions.”[8]

Interestingly, globalization is not a total erasure of the local culture. The local culture participates in shaping itself in accordance with these foreign products. They would buy a Hollywood film with two or more Moroccan films. Turner argues that:

Globalization does not mean the removal or erasure of local culture. Local cultures under the conditions of globality have become as important as global culture itself. Local culture does not surrender itself unproblematically to forces from outside; rather it absorbs as it valorizes its own distinctiveness. At the turn of the twenty-first century, what is local and what is global are becoming increasingly uncertain. The near-erasure of the distinction between the local and the global as spatial categories has given way to a disjuncture between conceptual and spatial polarities.[9]

To conclude, globalization is no longer understood as either global or local, rather it is an interaction between the global and local simultaneously or “glocal” in Robertson’s terminology.

*Youness Abeddour is a Moroccan graduate student in Cultural Studies at Sidi Mohamed Ben Abdellah University, Fez — Morocco. He obtained his Bachelor’s degree in English Studies having completed a thesis on The Presence of the Mellah in Morocco, 2009. Currently, he is doing research on The Representation of Moroccan Jews in Moroccan Cinema. He recently produced a documentary film on Moroccan Jews entitled Moroccan Judaism: A Culture in Danger and intends to produce a second part which will deal with the stories of Moroccan Jews who immigrated to Israel.He is Morocco World News’ correspondent in Fez, Morocco.