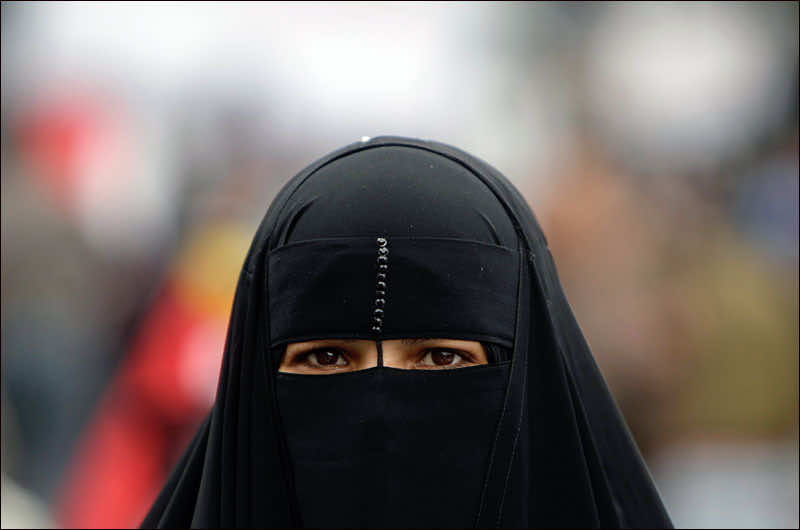 A heated debate flared in Tunisia after a female student wearing a niqab was denied admission at Sousse University. Hundreds of Salafists last week-end protested at universities in Tunis, Sousse, Bizerte and Sfax.

The Sousse University was stormed by a large group of “religious extremists”, who mounted a violent attack on the general registrar of the university, said Dean of the College of Arts and Humanities Moncef Abdul Jalil.

“We cannot deal with students when we don’t know what they look like,” he said. “We need to know the identity of students and their faces must be exposed so we know to whom we are speaking. The veil is not a problem, but the niqab is a problem.”

Professor Mohamed Guantassi agreed. He complained of the spreading prevalence of wearing the niqab inside universities, adding that it hinders communication between students and teachers.

He told Magharebia, “As a professor, I do not allow any student to study without seeing their face so I can know the extent of their comprehension of the lesson and interest in everything put forth in the classroom.”

He called on the dean and the ministry of higher education to issue an edict prohibiting wearing the niqab at various Tunisian university institutions, in line with the ministry’s 2010 decision.

Tunisian Grand Mufti Othman Batikh offered his judgment, saying last July that “the niqab was not from Islam at all”.

In a Saturday statement, the education ministry settled for condemning the violations endured by the university campus of the College of Arts and Humanities at Sousse, emphasising that it did not view the niqab from a religious or political perspective, but rather from a purely academic and pedagogical one.

It noted that the regulations in force at Tunisian universities necessitate verification of the identity of students before entering the institution.

For their part, the General Syndicate of Higher Education under the Tunisian General Labour Union (UGTT) expressed their desire for a balance between freedom of dress and ease of communication in university, but also supported the niqab ban.

Interim President Foued Mebazaa called for “ensuring the factors of proper functioning of academic institutions, further improving their performance, and safeguarding them from anything that would derail performance”.

Many associations and organisations – such as Society for the Defence of Veiled Women, the Freedom and Fairness Organisation, the Muslim Youth Society, and the Association of Muslim Women – expressed support for female students who wear the niqab, defending their right to education.

Meanwhile, student Marwa Saàdi insisted on her right to wear the niqab, saying that the decision banning it was illegal and an attack on the freedom of belief and dress.

“There is no law in Tunisia banning wearing the niqab or requiring any person to show their face,” she said. “Furthermore, I do not think this would be a barrier to communication between the professor and the student in a niqab. I am personally ready to interact with all professors in the classroom.”