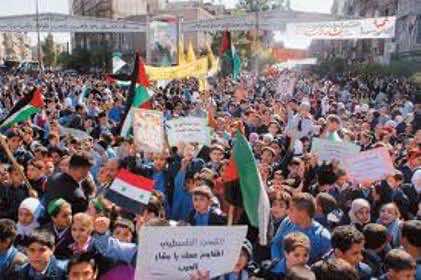 The collapse of autocratic regimes this year in the Middle East could be a permanent step forward for Arab democrats. But there are risks region-wide that a dictatorship even more pernicious, under theocratic leadership, will stifle aspirations for democracy as well as progress toward modernity.

U.S. officials, caught off guard by the dramatic events of the past ten months, now suggest that that they are willing to live with Islamist regimes, provided they meet a modicum of democratic standards. This new policy amounts to a complete misunderstanding of both the nature of these so-called Islamist movements and the complexity of the situation in the Arab-Muslim world.

Some Islamist movements aver their acceptance of a democratic framework, while others threaten to use violence to achieve their ends. But there is a link between the two: a broader ambition to establish a retrograde state based on antiquated interpretations of Islam that precludes coexistence with Jews and Christians and orients its policies around enmity toward the “Christian” West.

In Iran in 1979, proponents began to violently dominate and radicalize the state within a few months after the fall of the Shah. While some clerics and politicians in revolutionary Iran may have used the pen to achieve their aims rather than turn to the sword, they were nonetheless complicit in the bloodshed and oppression that followed. From the perspective of history, great creative minds from Wagner to Heidegger were similarly sympathetic toward, and arguably complicit in, the Nazi horror.

Among the political streams of Muslim societies, many, by contrast, espouse liberal, egalitarian, and truly democratic values. But, alas, these political elements suffer from a shared predicament: They are tainted by a history of cooperation and accommodation with the old regimes.

Acting together with the establishment, they presented themselves for years as a bulwark against Islamists, while exploiting this role to amass power and wealth. The bitter fruit of this political legacy is the disdain and distrust which many Arabs and Muslims now feel toward any politician who espouses the values of liberalism.

Meanwhile, Islamist power is growing, and suffocating what survives of the liberal ethos.

In Egypt, Islamists increasingly dominate the political process and are exacerbating the divide between Copts and Muslims.

In Tunisia, there are the beginnings of what may one day be described as a civil war between secularists and Islamists. Though supporters of Islamist groups are not the majority in either of these countries, they are the best organized and are gaining momentum.

The same is true, perhaps most chillingly, in Libya, where Tripoli appears poised to fall into the clutches of Al Qaeda elements who fought among the rebels and are likely to dominate the army.

A different approach toward democratization, it is hoped, is now underway in Morocco, where King Mohammed VI has introduced a more gradual as well as sustainable path toward mature democracy. The new constitution has transferred the bulk of Moroccan domestic authority to an elected prime minister. The government he leads will have many keys in its hands.

If the constitution is indeed implemented as promised, the parliament will have largely the same powers as the representative assemblies of the great democracies. It will enshrine the universal values of egalitarianism and liberalism — the very principles which are imperiled elsewhere in the region. As a check on the power of the executive as well as the legislative, a judiciary vested with greater authority and resources will have the wherewithal to fight corruption and protect human rights.

The implementation of these principles will require vigilance on the part of democratic activists in the country — but it is a goal well within reach. Eight political parties, ranging from socialists on the left to an Islamist coalition on the right, share in the responsibility to propel the process forward.

Islamists in Morocco will be tested, and by extension moderated, by a coalition framework that incentivizes them to deliver meaningful power and equality to every segment if the population.

That’s the kind of approach which should be encouraged by the West wherever Arab political transitions are now underway.

*The views expressed in this article are the authors’ own and do not necessarily reflect Morocco World News’ editorial policy.