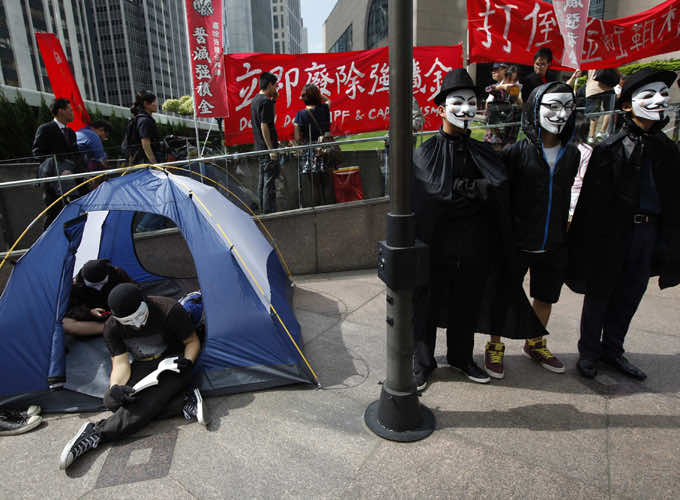 Protesters worldwide have joined the “Occupy Wall Street” movement in a cry of rage against bankers, financiers and politicians they accuse of ruining global economies and condemning millions to poverty and hardship through greed.

Dozens of cities across the world – from Tokyo to Alaska via London, Frankfurt and Washington – are holding demonstrations on Saturday, in a show of solidarity with the rallies that began last month in downtown New York.

“On October 15th people from all over the world will take to the streets and squares … to initiate the global change we want,” proclaimed the website United for #GlobalChange.

“We will peacefully demonstrate, talk and organize until we make it happen. It’s time for us to unite; it’s time for them to listen.”

“We face similar problems with our democracy here in Victoria and Australia as people face in most other developed nations,” the Occupy Melbourne website said. “Our democracy is unwell.”

In Sydney, about 2,000 protesters including representatives of Aboriginal groups, communists and trade unionists, protested outside the central Reserve Bank of Australia, at Martin Place in the central business district time.

Several protests and rallies were held simultaneously in various locations at the Japanese capital.

Hundreds of demonstrators marched to the headquarters of Tokyo Electric Power Co. and the Ministry of Economy, Trade and Industry to show dissatisfaction over the handling of the nuclear disaster triggered by the March 11 earthquake and tsunami.

Despite heavy rains in Seoul, the South Korean capital, members of more than 30 civic groups congregated outside the Financial Services Commission in Yeouido, the city’s financial district.

Local media reports said the police have denied the group permission to protest, though officials refused to speak on the record about their plans.

In Hong Kong, more than 200 people gathered at Exchange Square Podium in the city’s central shopping and business district.

Some pitched tents to stay overnight at the site while others later migrated to the HSBC building nearby.

Taipei, the Taiwanese capital, saw a smaller turnout of near 100 people than the expected 1,500, at the city’s landmark skyscraper Taipei 101, home to the Taiwan Stock Exchange.

The Occupy South Africa website announced “Operation Ubuntu”, a Nguni word used to describe unity for a common purpose through an African worldview that people can only find fulfilment through interacting with other peoples.

Protests are scheduled in the country’s major cities of Capetown, East London, Durban and Johannesburg for later on Saturday.

In Germany, the financial centre of Frankfurt and the European Central Bank was expected to be a focus of marches called by the Real Democracy Now group.

“What is happening in Greece now is the nightmare waiting other countries in the future,” Real Democracy said in a statement.

In Britain, about 4,000 people have signalled their intent to attend a peaceful demonstration that will start at noon today in the City of London — a leading international financial centre — under the banner “Occupy the Stock Exchange”, according to organisers.

In the United States, the founding “Occupation Wall Street” movement has urged more people and cities to join them on Saturday.

There have also been calls for occupations similar to that in Manhattan’s Zuccotti Park to take place in dozens of US cities.

In Houston, Texas, protesters plan to tap into anger at big oil companies.

The protests are billed as peaceful. But in a sign of what may happen, a group of students stormed Goldman Sachs’ offices in the Italian city of Milan on Friday.

The students managed to break into the hall of the Goldman Sachs building in the heart of Milan’s financial district.

The protests were quickly dispersed but red graffiti was daubed on its walls expressing anger at Silvio Berlusconi, the Italian prime minister, and saying “Give us money”.

Italian police were on alert for thousands to march in Rome against austerity measures planned by Berlusconi’s government.