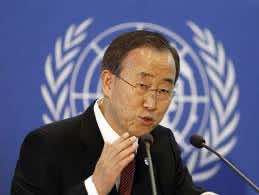 “The secretary-general is deeply concerned at continued efforts to advance planning for new Israeli settlements in occupied East Jerusalem,” Ban’s press office said in a statement on Friday.

The Peace Now anti-settlement group said on Friday that Israel planned to build the housing units in a new urban settlement in East Jerusalem, angering Palestinians who want a halt to all such projects before they return to Middle East talks.

The group said the settlement plan was approved earlier this week by an Israeli municipal committee, which had given the go-ahead for construction on the site that lies on land seized by Israel in 1967 and occupied ever since.

“The secretary-general reiterates that settlement activity in East Jerusalem and the remainder of the West Bank is contrary to international law,” the UN statement said, adding that such activity “must cease”.

The statement added:”Recent developments in this regard have been unacceptable, particularly as efforts are ongoing to resume negotiations, and run contrary to the Quartet’s call on the parties to refrain from provocations.”

The so-called ‘Quartet, consisting of the US, the UN, the European Union and Russia, is currently pressing for Israel and the Palestinians to resume direct talks.

Reports about a new settlement plan come as the Palestinians attempt to secure UN recognition of a sovereign Palestinian state in the West Bank and Gaza Strip, with East Jerusalem as its capital, along with full membership in the United Nations.

The Palestinian UN bid has infuriated Israel, while the United States has said it would veto any Palestinian UN application, which is currently being assessed by a UN security council committee.