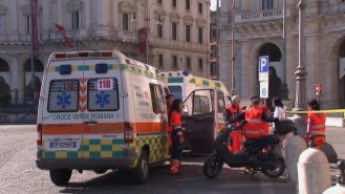 Cars were torched and shop windows smashed in Rome on Saturday as a protest against capitalism and austerity measures descended into violence. The protest was one of a series held in European cities including Berlin, Frankfurt and London.

The “Occupy Wall Street” protests that began in Canada and spread to cities across the U.S. moved Saturday to Asia and Europe, linking up with anti-austerity demonstrations that have raged across the debt-ridden continent for months.

Black smoke billowed into the air in downtown Rome as a small group of violent protesters broke away from the main demonstration. They smashed car windows, set vehicles on fire and assaulted two news crews of Sky Italia, the TV reported. Others burned Italian and EU flags.

Police were out in force in Rome, which expected up to 100,000 protesters a day after Premier Silvio Berlusconi barely survived a confidence vote. Italy, with a national debt ratio second only to Greece in the 17-nation eurozone, is rapidly becoming a focus of concern in Europe’s debt crisis.

“People of Europe: Rise Up!” read one banner in Rome. Some peaceful demonstrators turned against the violent group and tried to stop them, hurling bottles at them, Sky and the ANSA news agency reported. Others fled, scared by the violence.

Around 4,000 people marched through the streets of Berlin, with banners that urged the end of capitalism. Some marchers scuffled with police as they tried to get near the country’s parliamentary buildings.

In Frankfurt, continental Europe’s financial capital, some 5,000 people protested in front of the European Central Bank.

“The banking system in London is the recipient of corrupt money,” he said, adding that Wikileaks would launch a campaign against financial institutions in the coming months.

Assange is on bail as he fights extradition to Sweden, where he is wanted for questioning over claims of rape and sexual molestation made by two women.

In the Bosnian city of Sarajevo, hundreds walked through the streets carrying pictures of Che Guevara and old communist flags that read “Death to capitalism, freedom to the people.”

Another 500 people gathered to hear speakers denounce capitalism at a peaceful rally in downtown Stockholm, holding up red flags and banners that read “We are the 99 percent” and “We refuse to pay for capitalism’s crisis.”

The reference was to the world’s richest 1 percent, who control billions in assets, while billions around the world live in poverty or are struggling economically.

“There are those who say the system is broke. It’s not,” trade union activist Bilbo Goransson shouted into a megaphone. “That’s how it was built. It is there to make rich people richer.”

In Spain, groups that became known as the Indignant Movement established the first around-the-clock “occupation” protest camps in cities and towns across the country beginning in May and lasting for weeks.

Portuguese angry at their government’s handling of the economic crisis are protesting in downtown Lisbon later. Portugal is one of three European nations – the others being Greece and Ireland – that have already needed an international bailout.

A group of 100 prominent authors, including Salman Rushdie, Neil Gaiman and Pulitzer Prize-winning novelists Jennifer Egan and Michael Cunningham, signed an online petition declaring their support for “Occupy Wall Street and the Occupy Movement around the world.”

Turnout was light in Asia, where the global economy is booming.

In Sydney, around 300 people gathered Saturday, cheering a speaker who shouted, “We’re sick of corporate greed! Big banks, big corporate power standing over us and taking away our rights!”

“No to nuclear power!” marchers chanted as they held up banners.

In the Philippines, about 100 people marched on the U.S. Embassy in Manila to express support for the U.S. Occupy Wall Street protests and to denounce what they called “U.S. imperialism.”

In Canada, protests were planned in Montreal and Vancouver as well as at the country’s main stock exchange in Toronto.