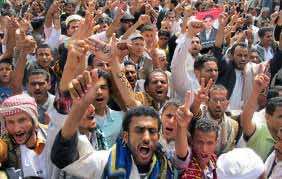 In a meeting with leaders of the Anes tribe, who also recently denounced Saleh and joined the opposition, General Ahmar said the new defectors were under his command to protect civilian protesters against Saleh’s forces, the independent News Yemen website reported.

Forces loyal to Saleh opened fire on protesters and rival tribes in Sanaa on Saturday killing at least 22 people and wounding 35 others, Al Arabiya correspondent reported.

The security forces used live rounds as well as tear gas and water cannon to try to disperse hundreds of thousands of Saleh opponents who were attempting to march on the city center from their stronghold in Change Square, witnesses said.

The body of one protester killed by a bullet to the head was taken to a field hospital in the square, along with 90 injured demonstrators, 20 of whom had bullet wounds, medics said, adding that the casualty toll was only preliminary.

The bodies of five more protesters were taken to the privately run Science and Technology Hospital along with dozens of injured, at least 15 of whom had bullet wounds, medics there said.

The clashes erupted on al-Zubeiri Street which marks the dividing line between parts of the capital held by troops loyal to Saleh and those held by dissident units under the command of General Ali Mohsen Al-Ahmar, who rallied to the opposition in March.

Activists had called on protesters to march on the front lines on Saturday in a bid to bring to a head 10 months of increasingly bloody demonstrations against Saleh’s 33-year rule in Sana’a.

In al-Hasba north of Sanna, clashes took place between the country’s Republican Guards and loyalists to the tribal chief Sadiq al-Ahmar on Saturday.

Around 10 of Ahmar’s tribesmen were killed as the Yemeni guards pounded their locations in Hasba. Smoke was also seen coming from Ahmar’s home.

The tribal chief who was part of the Yemeni General People’s Congress in February 2011 resigned after the anti-Saleh protests spread out. On March, Ahmar asked the embattled president to leave office.

On Friday, the Yemeni authorities failed to convince the Gulf Cooperation Council (GCC) to approve a number of proposed amendments on the Gulf initiative. The amendments propose that Saleh would remain in power until early presidential polls are held.

Yemeni political sources, Moscow and Beijing have invited the opposition leaders in Yemen to visit Russia and China next week.

According to a letter from Yemen’s youth movement to the United Nations earlier this month at least 861 people have been killed and 25,000 wounded since mass protests against Saleh erupted in late January.

Tens of thousands of pro-democracy activists remain camped out in the capital, empowered by the Nobel Peace Prize win of Tawakkul Karman, a fellow protester