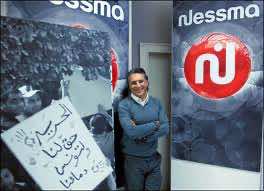 Fresh protests rocked the Tunisian capital last week-end. This time, the public anger revolved around the broadcasting of a controversial French-Iranian film.

“Persepolis”, an autobiographical animated film by Marjane Satrapi, was aired last Friday on Nessma TV. The comic depicts the story of an Iranian girl during the 1979 revolution and includes a scene of her conversation with God, personified as a white-bearded man.

Protests followed two days later, with some 200 people storming the offices of the television channel. The public prosecution in Tunis on Monday opened a criminal investigation of Nessma TV for defaming Islam. A day later, the head of the channel apologised for “the dissemination of the controversial and considered blasphemous sequence representing the divine being”.

“I consider this a mistake that will never be repeated,” Nabil Karoui said. “We did not mean to offend Muslims by airing it on Friday in particular. That day just coincided with the date of airing the weekly talk show.”

Meanwhile, Karoui expressed “astonishment” at some reactions that resulted from showing the film, including comments made by Ennahda Movement that the TV station “intended to offend Islamists in Tunisia”.

“Our internal statistics show that this party is on the top of parties that are invited to our talk shows on Nessma TV,” Karoui explained.

The controversy surrounding the broadcasting prompted a debate on freedom of speech and respect for religious beliefs in the post-revolution Tunisia. While some believe that the move crossed the red lines at this sensitive juncture in the nation’s history, others maintain that the reactions were overblown.

“Nessma TV is not allowed to attack beliefs and sanctities,” said Tunisian journalist Hedi Tarchouni. “Everyone should show responsibility towards the October 23rd election date to fend off any attempt to confuse or derail the electoral process.”

For his part, journalist Mokhtar Khalfaoui argued that there is a deeper meaning to the movie than just the pictorial depiction of God.

“One of the biggest fallacies is to turn the issue from an animated movie telling an autobiography, or a collective biography of the Iranian revolution that ended in the biggest dictatorship, and reduce all that to a short, human and a deep poetic scene in which a child is visited by her own God,” he said. “This is their fallacy so that people may not pay attention to the lesson to be learnt from the film, which is that a revolution can only be associated with the idea of progress.”

“I think that the timing of airing the film is not suitable,” Maha Jemai, 29, told Magharebia. “Tunisia needs calm and stability now so that the election of the Constituent Assembly may pass in peace. As a viewer, I respect and appreciate the freedom of expression, but we must not cross certain red lines such as attacks on religions and people’s beliefs whatever their religion may be.”

Meanwhile, the National Commission for the Reform of Media and Communication said they “strongly condemn all forms of violence and attempts to intimidate journalists and silence them”.

“We believe that this attempted attack poses a danger to the freedom of expression, which is one of the pillars of democracy,” the media reform panel said in a statement. “Therefore, we call on the authorities concerned to take all the necessary actions to protect this right and guarantee the freedom of media.”

The commission called on all media institutions to abide by the code of press ethics, including neutrality and objectivity, as well as exhibit responsibility and avoid any attempts to derail the electoral process.