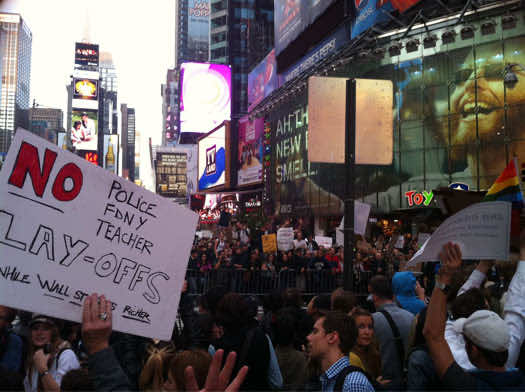 Tens of Thousands Flood the Streets of Global Financial Centers, Capitol Cities and Small Towns to “Occupy Together” Against Wall Street Mid-Town Manhattan Jammed as Marches Converge in Times Square

After triumphing in a standoff with the city over the continued protest of Wall Street at Liberty Square in Manhattan’s financial district, the Occupy Wall Street movement has spread world wide today with demonstrations in over 1,500 cities globally and over 100 US cities from coast to coast. In New York, thousands marched in various protests by trade unions, students, environmentalists, and community groups. As occupiers flocked to Washington Square Park, two dozen participants were arrested at a nearby Citibank while attempting to withdraw their accounts from the global banking giant.

“I am occupying Wall Street because it is my future, my generations’ future, that is at stake,” said Linnea Palmer Paton, 23, a student at New York University. “Inspired by the peaceful occupation of Tahrir Square in Cairo, tonight we are coming together in Times Square to show the world that the power of the people is an unstoppable force of global change. Today, we are fighting back against the dictators of our country – the Wall Street banks – and we are winning.”

New Yorkers congregated in assemblies organized by borough, and then flooded the subway system en mass to join the movement in Manhattan. A group calling itself Todo Boricua Para Wall Street marched as a Puerto Rican contingent of several hundred playing traditional music and waving the Lares flag, a symbol of resistance to colonial Spain. “Puerto Ricans are the 99% and we will continue to join our brothers and sisters in occupying Wall Street,” said David Galarza Santa, a trade unionist from Sunset Park, Brooklyn. “We are here to stand with all Latinos, who are being scapegoated by the 1%, while it is the bankers who have caused this crisis and the banks who are breaking the law.”

While the spotlight is on New York, “occupy” actions are also happening all across the Midwestern and the Southern United States, from Ashland, Kentucky to Dallas, Texas to Ketchum, Idaho. Four hundred Iowans marched in Des Moines, Iowa Saturday as part of the day of action:

Protests filled streets of financial districts from Berlin, to Athens, Auckland to Mumbai, Tokyo to Seoul. In the UK over 3,000 people attempted to occupy the London Stock Exchange. “The financial system benefits a handful of banks at the expense of everyday people,” said Spyro Van Leemnen, a 27-year old public relations agent in London and a core member of the demonstrators. “The same people who are responsible for the recession are getting away with massive bonuses. This is fundamentally unfair and undemocratic.”

600 people have begun an occupation of Confederation Park in Ottawa, Canada today to join the global day of action. “I am here today to stand with Indigenous Peoples around the world who are resisting this corrupt global banking system that puts profits before human rights,” said Ben Powless, Mohawk citizen and indigenous youth leader. “Native Peoples are the 99%, and we’ve been resisting the 1% since 1492. We’re marching today for self- determination and dignity against a system that has robbed our lands, poisoned our waters, and oppressed our people for generations. Today we join with those in New York and around the world to say, No More!”

In Australia, about 800 people gathered in Sydney’s central business district, carrying cardboard banners and chanting “Human need, not corporate greed.” Protesters will camp indefinitely “to organize, discuss and build a movement for a different world, not run by the super-rich 1%,” according to a statement on the Occupy Sydney website.

The movement’s success is due in part to the use of online technologies and international social networking. The rapid spread of the protests is a grassroots response to the overwhelming inequalities perpetuated by the global financial system and transnational banks. More actions are expected in the coming weeks, and the Occupation of Liberty Square in Manhattan will continue indefinitely.

Occupy Wall Street is a people powered movement that began on September 17, 2011 in Liberty Square in Manhattan’s Financial District, and has spread to over 100 cities in the United States and actions in over 1,500 cities globally. #OWS is fighting back against the corrosive power of major banks and multinational corporations over the democratic process, and the role of Wall Street in creating an economic collapse that has caused the greatest recession in generations.The movement is inspired by popular uprisings in Egypt, Tunisia, Spain, Greece, Italy and the UK, and aims to expose how the richest 1% of people who are writing the rules of the global economy are imposing an agenda of neoliberalism and economic inequality that is foreclosing our future.