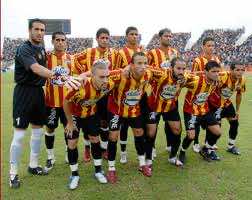 Tunisian champions Esperance are through to a successive CAF Champions League final after they defeated Al Hilal of Sudan 2-0 Saturday in Tunis.

Esperance thus qualified for the championship game of Africa’s foremost club competition 3-0 on aggregate having won the first semifinal 1-0 in Omdurman.

Tunisia international midfielder Youssef Msakni was again first off the mark as he was a fortnight ago in Sudan.

However, unlike it was in Sudan when he scored after just four minutes, Msakni and Esperance had to wait till the 52dn minute to get on the scoreboard.

‘The Blood and Gold’ wrapped up their home victory with a 90th minute goal by Wajdi Bouazzi in a match played inside an empty Rades Stadium as a result of a CAF ban.

The 1994 African champions now await winners of Sunday’s other semi-final between Wydad Casablanca of Morocco and Enyimba of Nigeria.

Wydad hold a 1-0 lead from the first semifinal clash in Morocco two weeks ago.

Esperance were beaten in last year’s final by TP Mazembe of DR Congo, but they are now favourites to win their second Champions title with internationals Oussama Darragi and Khaled Korbi expected to be available for the final.

The winners of this year’s competition will represent Africa at the Fifa Club World Cup in Japan from December 8. Last year, TP Mazembe made history by becoming the first African club to reach the final of the tournament.