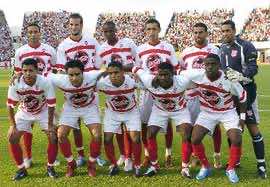 Club Africain of Tunisia have taken a huge advantage going into the Caf Confederation Cup semifinal second leg in a fortnight after they won 1-0 at Sunshine Stars of Nigeria on Saturday.

The big striker latched on to a through pass from midfield to beat onrushing goalkeeper Moses Ocheje to the delight of the handful of Club Africain travelling fans.

Sunshine thought they had drawn level in the 81st minute, when midfielder Cletus Itodo fired home from inside the box but the effort was not allowed to stand as the ball tore through the side netting.

It was the first home loss in the competition for the Akure club, who are aiming to become the first Nigerian team to win this trophy since it was introduced seven years ago.

They were promised huge financial rewards to win well on Saturday.

As expected, they pressed for an opening goal in the first 45 minutes but either Club Africain goalkeeper Aymen Ben Ayoub kept them at bay with some timely saves or their finishing let them down.

The kick-off was delayed by an hour because of a heavy downpour, but when it finally got underway, Club Africain did not look like the team who had embarked on strike action over unpaid salaries before they flew into Nigeria.

Wajdi Mecheregui for Club Africain was injured in the first half and was replaced by Youssef Mouihibi.

The Tunisians gave as much as they got and after a cautious first half, they opened up soon after the interval and their offensive approach was soon rewarded with the only goal of the game.

Sunshine leading scorer Ajani Ibrahim, Dayo Ojo, Ukeyima Akombo and Dele Olorundare all came close to getting an equaliser for the Nigerians in the second half but Club Africain defence was smart and solid.

The second leg of this semi-final will be played in two weeks inside an empty stadium after the Confederation of African Football (CAF) slammed a two-match ban on Club Africain for crowd trouble during a group match against Asec Mimosas of Abidjan.