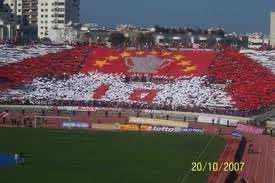 This year’s Caf Champions League final will be an all-North African affair after Morocco Wydad Casablanca eliminated Enyimba to set up a clash with Esperance of Tunisia.

Wydad reached the final at the expense of two-time champions Enyimba on a 1-0 on aggregate after they won the first leg semifinal 1-0 a fortnight ago before they held Enyimba to a goalless draw in Aba Sunday afternoon.

On Saturday, Esperance defeated Al Hilal of Sudan 2-0 to qualify for the final 3-0 on aggregate.

Both Wydad and Esperance would therefore be aiming for their second continental championship after they emerged champions in 1992 and 1994 respectively.

The winners of this competition will besides pocketing a prize money of €1.5 million also represent Africa at the Fifa Club World Cup in Japan from December 8. On Sunday, Nigerian champions Enyimba had hoped they could turn the table against the Moroccans in front of thousands of their fans at the Enyimba International Stadium, but they did not bargain with a WAC side who held firmly in defence and even threatened when they attacked.

Enyimba were largely unco-ordinated in the first half as Wydad enjoyed more of the ball and even launched a couple of attacks.

Their best opening came after 10 minutes when a long distance shot crashed against the Enyimba goal post.

However, after the break Enyimba played with a lot more purpose but still could not find their way past the WAC defence line.

Three minutes into the second half, they created two great chances but on both occasions strikers Uche Kalu and Ifeanyi Ede failed to deliver the killer punch.

There were more spurned chances by Enyimba late on including one from seven yards out by substitute Victor Barnabas, who only needed to place his shot to find the back of the Moroccan net.