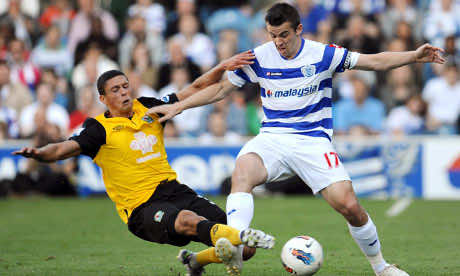 Neil Warnock’s attempt to keep Queens Park Rangers in the Premier League has been complicated by a double outbreak of dressing-room discontent, as Joey Barton publicly criticised the attitude of his team?mate Adel Taarabt while Warnock called for help to catch a mole who is leaking team secrets.

Barton, speaking on live radio, said that Taarabt should have apologised for his reaction to being substituted during the 6-0 defeat by Fulham this month when he walked straight out of the stadium and took a bus home. Barton also indicated that the Moroccan only had himself to blame for his poor performances so far this season.

“At the end of the day this is the top level of world football, and if you’re not prepared to work hard you’ll come up massively short,” Barton told Rock ‘N’ Roll Football on Absolute Radio Extra. “If I was Adel and I had Adel’s ability I’d not be wanting to come up short having not worked hard enough. He was told he was a genius; I’ve yet to see it, and I don’t know whether that’s because he doesn’t work hard enough or whether he tends to sulk. I’m happy that he’s upset really because it shows he does care, but there’s a way of doing it. He wouldn’t like to come in and apologise for doing that, and maybe didn’t think he needed to, but to a lot of the senior players maybe he should have.”

The relationship between Barton and Taarabt – both forceful, idiosyncratic characters – was always likely to be fraught but Warnock will know that the club will have a better chance of staying in the top flight if he can get both of them playing together to their full potential. He will also know that may not be possible.

Taarabt, who was the inspiration behind the club’s promotion last term, has struggled to make an impact so far this season. He was dropped against Blackburn and only came on in the 64th minute, after which he missed his team’s best chance of the game, scuffing wide when clean through on goal.

Christopher Samba’s 24th-minute header from a corner followed Heidar Helguson’s 16th-minute strike for the hosts to share the points. Taarabt reportedly told journalists in Morocco last week that he wants to leave QPR in January. Warnock claimed to be unconcerned and declined to reveal whether he dropped Taarabt against Blackburn for disciplinary or performance reasons. The manager did, however, vent his fury at that decision being leaked, along with the rest of his line-up, the day before the match on the QPR fans’ website WeAreTheRangersBoys.com. He believes that was another symptom of dressing room dissent, suggesting that the person who posted the information – under the pseudonym RicRoc – must be close to one of the club’s disgruntled players. He vowed to publish RicRoc’s email address and encourage QPR fans to “bombard him with rubbish.”

“Things like that should be kept in-house,” said Warnock. “It’s possibly a player contributing that’s probably not wanted. I hope our loyal fans get hold of him – I’ll definitely put it on our website – and bombard him with rubbish. It’s disappointing when it comes from the dressing room. That’s the only place it could have come from. Obviously the person has got some good inside information. We’ll have to tighten things up.”

The Guardian emailed RicRoc, who refused to reveal the source of his information, but did reply thus: “Neil Warnock can say what he wants, he is merely deflecting away from the fact QPR performed poorly for the third game running. I am his biggest supporter and will remain so regardless.

“I know the line-up every week but have never ever posted it online. I made a post yesterday concerning DJ Campbell’s injury and Jamie Mackie’s return. It was info that national media report on 24/7 so thought no more of it. When I realised this wasn’t the case in this instance I personally asked the owner of watrb to remove it. At the same time I was contacted by the club and asked pretty much the same as you have asked me. The post was not removed, why? Hits? Site traffic? Hmmm. If NW wants to talk to me personally, you know where I am.”