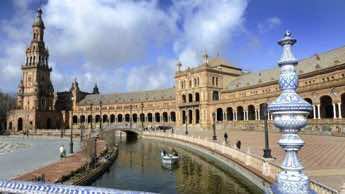 The UN’s education and culture agency has warned the Spanish city of Seville that it may lose its status as a UN World Heritage site because of a new 41-storey skyscraper under construction near the historic city centre.

Seville is famed for its imposing cathedral and whitewashed streets but the Spanish city may lose its UN World Heritage status because of a new 41-storey skyscraper.

The 178-metre (584-foot) high, oval-shaped building, still under construction, will house the offices of savings bank Cajasol when completed in 2012.

It was designed by Argentine-American architect Cesar Pelli, who is responsible for some of the world’s tallest buildings, including the Petronas Towers which dominate the skyline of Kuala Lumpur.

Pelli’s office boasts the new skyscraper “will define the skyline of Seville.”

But that is a prospect that dismays the United Nations Educational, Scientific and Cultural Organization (UNESCO) which since July has called in vain for work on the project to be stopped.

It is planning a visit to the city together with the International Council on Monuments and Sites (ICOMOS) to “determine if the skyscraper has a visual impact on the historic centre of Seville, said UNESCO spokeswoman Lucia Kuntz.

ICOMOS, which works to protect cultural heritage sites around the world, advises the UN body on World Heritage sites, which include cultural landmarks such as the Great Wall of China and the leaning Tower of Pisa.

The building already rises up eight stories into the sky just several hundred metres — and on the other side of the Guadalquivir river — from the historic centre of Seville.

The city was awarded the title of World Heritage site in 1987 for its gothic cathedral which houses the tomb of Christopher Columbus held aloft by four statues of soldiers, and its old Jewish quarter, the barrio de Santa Cruz.

Among the city’s other landmarks is the Real Alcazar, a complex of palaces that has been used by Spanish royals for over six centuries centuries, and the Giralda, a bell tower of the cathedral that used to be the minaret of a Moorish mosque.

The report drawn up by the UNESCO and ICOMOS inspectors on the impact of the skyscraper on the skyline will be analysed at the next session of the the World Heritage Committee in the summer of 2012.

UNESCO has dropped two other sites as a World Heritage site in the past — Germany’s picturesque Dresden Elbe Valley in 2009 and Oman’s Arabian Oryx sanctuary two years earlier.

Dresden was dropped from the list for building a four-lane motorway bridge over the river that damaged the landscape while the sanctuary in Oman was de-listed because poaching and habitat degradation had led to a decline in the numbers of rare species there.

A protest group called “Tumbala!”, which means “Knock it down” in Spanish, has staged regular protests in Seville to demand that the city’s mayor, Juan Ignacio Zoido, stop the building works on the project.

“This would avoid the damage that Seville would suffer by being dropped from the UNESCO World Heritage list and he could go down in history as the mayor who governed the city where this happened,” it said in a statement last week.

Zoido, a member of the conservative Popular Party who was elected for a first term in May, was still not in office when UNESCO demanded that work on the skyscraper be stopped.

“That has delayed the decision,” said a spokeswoman for the municipality, adding the city would do all it could to remain on the world heritage list.

“The mayor will not allow Seville to lose its status as a world heritage site, It is very important for the city,” she said.