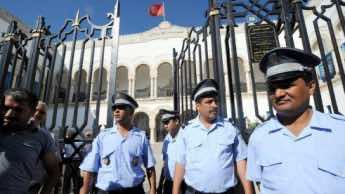 Thousands of Tunisians marched through the capital Tunis Sunday in a show of support for a television station subjected to violence after airing a controversial film that offended Muslims.

Thousands of people marched through Tunis Sunday to support a television station subjected to violent protests last week after broadcasting a controversial film that offended Muslims.

The demonstrators were answering a call on Facebook to demonstrate for free speech, just two days after demonstrations against Nessma TV for its showing of award-winning “Persepolis” degenerated into violence.

While some marchers shouted slogans calling for freedom of speech and tolerance, others had taped over their mouths in a sign of protest at what they see as a growing climate of intolerance in the country.

There was a large police presence for the march, but no reports of trouble.

On Saturday, Tunisia’s Islamist party Ennahda, tipped to dominate elections due later this month, condemned an attack on the home of the head of Nessma television the day before and denied any role in the violence.

But Ennahda party chief Rached Ghannouchi also accused the station of “provocation” for having aired the animated film.

The globally acclaimed film on Iran’s 1979 revolution offended many Muslims because it depicts an image of God as an old, bearded man. Islam forbids any depictions of God.

On Friday, shortly after the attack on station chief Nabil Karoui’s home, the station accused some imams of having incited the violence, alleging that Ennahda, though nominally moderate, had tacitly encouraged it.