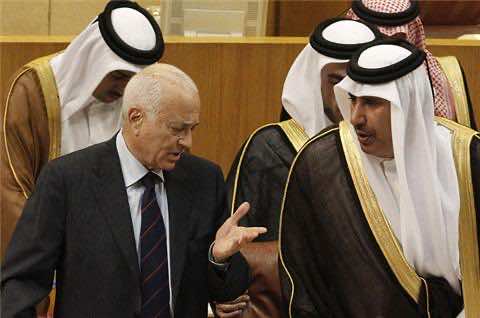 Body rejects demands for Syria’s suspension and calls on opposition and government to hold a dialogue within 15 days.

The Arab League has announced that it plans to bring together Syria’s government and opposition groups to seek ways to end the violence in the country, Hamad bin Jassim Al-Thani, Qatar’s prime minister, said.

Defying calls for Syria’s suspension from the regional body over a worsening army crackdown on political unrest, the league decided on Sunday to form a ministerial committee to forge dialogue between the government and opposition.

“We will call all of the parties of the opposition and government to hold a dialogue within 15 days,” the league’s Secretary General Nabil Elaraby said after an emergency meeting of Arab foreign ministers in Cairo.

But Youssef Ahmad, Syria’s ambassador to the Arab League, aired his country’s reservation on the League’s resolution “part and parcel”, including its wording, and particularly mentioned “the biased and negative role played by Qatar”, SANA, Syria’s official news agency said.

The ambassador said that his country won’t hold talks in Cairo, affirming that Syria is an independent and sovereign country led by a legitimate authority, and that “any national dialogue can only be held in Syria”.

Many Syrian activists have also rejected the idea of talks in Cairo. “We said it from the day the first martyr fell: No dialogue with the killers,” wrote prominent Syrian opposition figure Suhair Atassi on her Twitter feed. She is in hiding.

The league had met to discuss whether to suspend Syria in a bid to increase pressure on the government of President Bashar al-Assad to end its security crackdown on anti-government protesters.

Although the suspension would not have had a direct, tangible impact on Syria, it would have constituted a major blow to  Assad’s embattled regime by stripping Damascus of its Arab support and further deepening its isolation.

Sunday’s meeting was requested by several Gulf Arab countries, around six months after initially peaceful protests calling for reform and the end of Assad’s rule first began to sweep the country.

Many Gulf states have pulled their ambassadors out of Syria in protest against the security crackdown, which the UN says has killed more than 3,000 people.

The UN Security Council has not condemned the violence, owing to vetoes from Russia and China.

India, Brazil and South Africa, which hold non-permanent Security Council seats and are considered a bloc of influential developing countries, abstained from the vote, prompting criticism from Human Rights Watch.

The UK-based Syrian Observatory for Human Rights said that four civilians died in the central city of Homs when security forces opened fire on a protest outside the home of a detained activist, Mansur al-Arassi.

Two other people were killed outside a mosque in the Khaldiyeh sector of the city by attackers who opened fire from a vehicle, the rights group said. It said 39 people were wounded in the two incidents.

In the Damascus region, one person was killed in the town of Zabadani, where security forces earlier arrested 25 people, including three young women, the group said.

It said the death occurred when security forces fired on people after they left a mosque and began protesting in the streets calling for the release of detainees.

In Idlib province of northwest Syria, two people were killed in Khan Sheikhun near the border with Turkey when security forces fired live rounds to break up a protest, the group said.

Assad has alleged that foreign powers are behind the unrest in his country, which has divided opinion in the Middle East.

On Sunday, the Syrian ambassador held up a document he said was shared with the Arab foreign ministers. In it, he alleged, was proof that weapons from Israel had been found in Syria among the protesters.