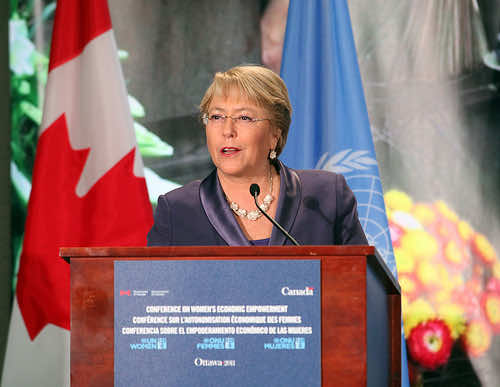 The United Nations women’s fund for gender equality on Sunday invited organizations and government agencies to apply for grants, adding that first phase of its 2011 funding cycle will give priority to proposals that seek to empower women and their communities in Arab countries.

“We hope that these grants support women in their quest for democracy, equality and political participation,” she said in the statement calling for submission of proposals to be considered for funding.

UN Women administers and oversees the Fund for Gender Equality, which was initiated by Spain and is dedicated to advancing women’s rights and gender equality.

The focus on supporting women’s political and economic empowerment in the Arab world is in recognition of the recent developments in the region, which has created additional opportunities for supporting efforts to improve conditions for women and girls there, according to UN Women.

The Fund has set aside $16 million for its 2011 grants cycle, with $4 million earmarked for projects in Arab States, with more support available if contributions to the Fund increase.

Grants will start at $200,000 for initiatives that make tangible improvements in the lives of women and girls.

Applicants may download the Call for Proposals and Grant Application at http://www.unwomen.org/fge/application-guidelines. The first set of grants will be announced in December.

Next year, the Fund will complete the second grant cycle by inviting grant proposals from Africa, Asia and the Pacific, Latin America and the Caribbean, and Eastern Europe and Central Asia.

Created in 2009 with an initial contribution of $65 million from the Government of Spain, the Fund has expanded with contributions from Norway and Mexico.

UN Women is urging Member States, the private sector and individuals to contribute to the vital source of funding for women and gender equality.