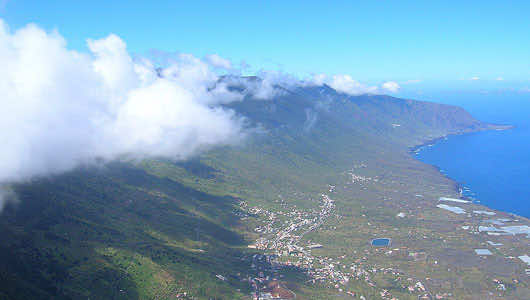 Two new volcanic eruptions were confirmed in the Canaries, where 500 people were evacuated as a precautionary measure.

Two new volcanic eruptions were confirmed on Wednesday near Spain’s El Hierro island in the Canaries, where 500 people spent another night outside their homes after being evacuated as a precautionary measure.

“I confirm the existence of two points of volcanic eruption at El Hierro,” Laura Otero, a spokeswoman for the local authorities, told AFP, adding that there were dead fish and a strong odor of sulfur at both sites.

The head of emergency services in the Canaries, Juan Manuel Santana, said in a statement that “the two points are located at two nautical miles and 1.5 miles southwest of (the village of) La Restinga”.

He said the eruptions “resulted in two stains on the sea surface where there are dead fish and a strong odour of sulfur.”

Some 500 residents and tourists were evacuated from the village of La Restinga as a precautionary measure on Tuesday after a 4.3-magnitude quake the previous day, the first volcanic euption in the Canaries in 40 years.

Monday’s eruption was detected 3 miles from the island at a depth of between 1,640 and 3,940 feet beneath the sea.

Experts had said the eruption would not be felt on the island.

Most of the evacuees have found refuge with relatives or friends in other villages on the island. But dozens of others, mostly tourists, spent the night in a student dormitory and a local gym.

Pointing to “uncertainty over the coming days”, authorities said in a statement that they were keeping Restinga on “red alert”, while the rest of the island remained on yellow alert, one notch lower

“It is recommended to exercise caution,” said Paulino Rivero, head of the Canaries administration.

But he said people would be able to return to their homes under the protection of civil safety officials to retrieve medicines or clothes.

El Hierro, which means iron in Spanish, is the smallest of Spain’s Canary Islands, located in the Atlantic off the coast of Morocco.

Perched atop an ancient volcano, the island of Hierro has undergone some 10,000 tremors since July 19, the vast majority of them not felt by its 11,000 residents.

The last volcanic eruption on the Canary Islands was on nearby La Palma in 1971.