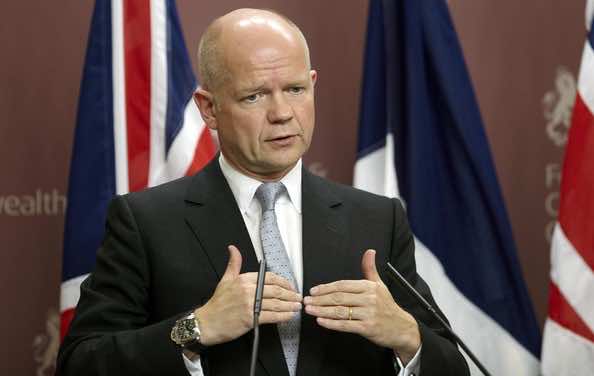 British Foreign Secretary William Hague warned Libya’s neighbors on Monday not to shelter Muammar Gaddafi or members of his entourage who have been indicted by the International Criminal Court.

“We’ve been very active in reminding other countries in Africa of their responsibilities … to apprehend and to hand over to Libya or the ICC any of those people who go on to their territory,” Hague said in Tripoli.

“We will continue to assist in looking for them.”

Hague did not say what form the help would take. British air power helped prevent Gaddafi crushing the uprising against him and rebels have said British special forces have been on the ground. Britain does not comment on their whereabouts.

“We’ve made representations to the governments of Niger and Burkina Faso in particular but we don’t know where Gaddafi is, so we can’t solve that one at the moment,” Hague told Reuters en route to his next stop in Morocco.

Hague, in Libya for the appointment of a new British ambassador, also said he had raised the issue of the alleged mistreatment of prisoners by Libya’s new interim rulers, who captured Tripoli in August ending Gaddafi’s 42-year rule.

“They say there have been some cases of that, they are determined to act very strongly about it,” Hague told Reuters.

The new government believes Gaddafi is in hiding somewhere in Libya’s vast desert, but some close relatives and senior allies have crossed into neighboring Chad and Algeria.

National Transitional Council (NTC) forces are still battling two pockets of pro-Gaddafi resistance in the towns of Sirte and Bani Walid, which are holding up the country’s return to something approaching normality.

Hague said he did not think there was any undue delay in the fighting: “The important thing is that progress is being made.”

“Of course we do want to see the various militias all brought under one central system and central control and I think that will happen when a transitional government is formed. But I think they are all working together now, and so there is no immediate cause for alarm about that,” he said later.

London would also soon send the final shipment of millions of dollars worth of Libyan banknotes that had been printed in Britain before the conflict but not delivered due to sanctions.

“We will discuss with them the unfreezing of further assets as they need them and as they are ready to use them. They are actually not ready to make use of them yet,” Hague said.

He said there were around 10 billion pounds of assets still frozen in Britain.