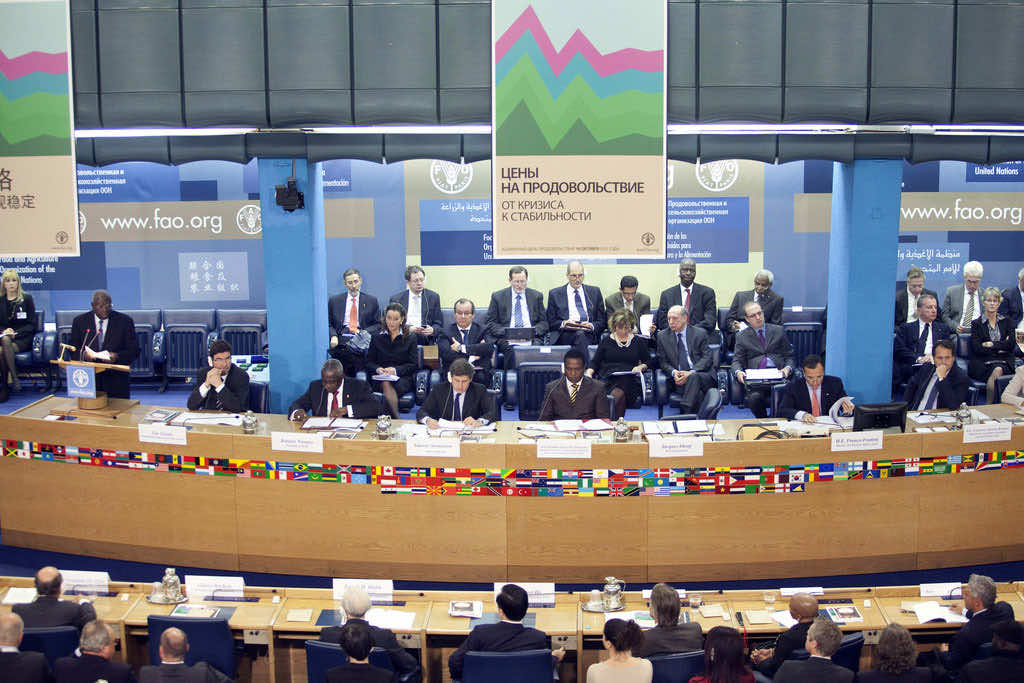 The United Nations and international figures marked World Food Day today with calls for immediate aid and longer-term solutions, and warnings of factors that keep hundreds of millions mired in hunger, such as price swings and gender discrimination.

In a message delivered to a ceremony at the UN Food and Agriculture Organization (FAO) headquarters in Rome, Secretary-General Ban Ki-moon stressed that there is more than enough food on the planet to feed everyone, yet nearly one billion people will go hungry because food is unavailable or unaffordable

“Today, in the Horn of Africa, more than 13 million people are affected by one of the region’s worst droughts in 60 years,” he said, referring to a crisis that in war-torn Somalia alone has already killed tens of thousands of people, put 750,000 more at risk of death in the next few months if there is no adequate response, and affected four million others.

“Yet, drought does not need to become famine – nor should it ever be allowed to, either through system failure or through the kind of deliberate deprivation we are seeing in areas controlled by Al-Shabaab,” he added, referring to the Islamic militants who hold much of southern Somalia.

This year’s theme for the Day is “Food prices – from crisis to stability,” focusing on recent price swings, at nearly record highs, that threaten to push millions more people into hunger.

FAO Director-General Jacques Diouf stressed that over $80 billion in additional investment is needed annually to ensure food supplies for the world in 2050, attributing the devastating impact of soaring and volatile food prices on the livelihoods of the poor to 20 years of under-investment in agriculture and neglect.

“The world has the knowledge and financial means needed to ensure food security for all, and thus a more stable world. Now is the time to make it happen,” he concluded.

In a reference to the Horn of Africa Pope Benedict XVI said in a message: “In the face of the death of entire communities due to hunger and the forced abandonment of people’s lands of origin, immediate assistance is essential, but it is necessary also to intervene in the medium and long-terms so that international activity is not only responding to emergencies.”

He described as “lamentable” the idea gaining ground that food was just merchandise and thus subject to speculative movements.

UN Women’s Executive Director Michelle Bachelet warned that a significant cause of food insecurity is “the poverty and discrimination faced by women and girls, including women farmers. Since women are on the frontlines of food security, we need to put their needs and rights at the forefront of trade and agricultural policies and investments to move from crisis to stability,” she said.

“If the world is to meet the challenge of feeding people today and nine billion people by 2050, we must invest in girls and women, who are key to food security… Empowering women and girls is key to progress in development, food security and improved nutrition.”

UN World Food Programme (WFP) Executive Director Josette Sheeran also stressed the fundamental role of women. “Women are the secret weapon against hunger. They are a powerful force in the fight against malnutrition,” she said.

“When women have food, children eat. When they are helped to grow food, communities eat. So, an important key to fighting hunger is to provide women with knowledge and skills, capital and tools, to help achieve food security for themselves, their family, and their community.”

UN International Fund for Agricultural Development (IFAD) President Kanayo F. Nwanze noted that while droughts are not preventable, famines are.

“There are effective strategies and tools that farmers can use to increase their resilience to climatic and other shocks. Long-term investment in agriculture – not only from international donors, but from the countries themselves – is the key to ensuring that such tragedies do not happen again,” he said.

In a message to the ceremony President Obiang Nguema Mbasogo of Equatorial Guinea, current Chair of the African Union (AU), said sub-Saharan Africa in particular is bearing the brunt of the food price crisis. He identified improving productivity and competitiveness of small farmers, investment in agriculture and policies related to land tenure as priorities.

For Italian Foreign Minister Franco Frattini, ridding the world of hunger requires a different form of globalization, one reflecting the concepts of “sharing, generosity and cooperation.”

The Day was also marked elsewhere in the world. In Changwon, Republic of Korea, (ROK), the Conference of the Parties to the UN Convention to Combat Desertification (UNCCD) has been discussing future food security, with its Executive Secretary Luc Gnacadja warning that high and volatile food prices are likely to last for some time to come.

“World Food Day is a powerful reminder of the vast inequalities in the availability of food for the world’s population,” he said.

In a related development, a high-level panel of experts on food security and nutrition working under the auspices of the UN Committee on World Food Security (CFS) has released two new reports – one on price volatility and food security, and the other on land tenure and international investments in agriculture. They will be discussed at CFS’ five-day annual meeting beginning today in Rome.