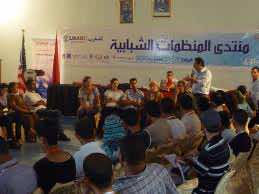 Moroccan activists are criss-crossing eighty towns and villages to spur youth interest in politics ahead of the early parliamentary vote.

The ten-day caravan, launched on Saturday (October 15th) by the Movement of Young Moroccans for Political Representation Now, includes an array of public meetings and awareness campaigns to encourage youths to vote in the November 25th elections.

Two hundred activists representing 29 youth groups and 17 other civil society organisations will visit Laâyoune, Ouarzazate, Al Hoceima and Oujda among many other destinations.

Young people need to be given a fresh perspective on politics, Socialist Youth Secretary-General Driss Redouani said, stressing the need to enable talented youths to assume positions of responsibility.

During their recent Rabat meeting, the youth movement hailed the adoption of Moroccan electoral list quotas, which reserve thirty parliamentary seats for candidates under the age of forty. It is a significant step that will guarantee the presence of young people in the legislative body, participants in the October 6th meeting agreed.

The proposal, however, has drawn criticism from some parties and women’s activists. Ahmed Zaidi, head of the Socialist Union of Popular Forces (USFP) parliamentary group, argued that electoral quotas should be reserved for women, with youths granted representation via other channels.

Latifa Bennani Smires, head of the Istiqlal parliamentary group, also advocated for a women-only national list, saying that youth candidates should find other venues to make their way to politics.

Despite resistance from parliamentary groups and feminist lobbying, youth candidates have held on to their thirty seats and hope for greater representation in local electoral lists.

Efforts to secure local lists, however, might falter on young people’s lack of experience, some political observers say.

Parties will favour those who have the necessary means to wage and win electoral campaigns, whereas young people are not currently regarded as a strong electoral force, political expert Ali Chemmam said. He added that political parties should encourage their young members to participate en masse in the 2012 local elections so that they can earn experience and electoral foothold before running in legislative elections.

“It is young members of political parties who will restore the confidence that people have lost in the political system,” Chemmam said. “They will speak the same language as other young people who have no interest in politics or have a distorted perception of the political arena.”