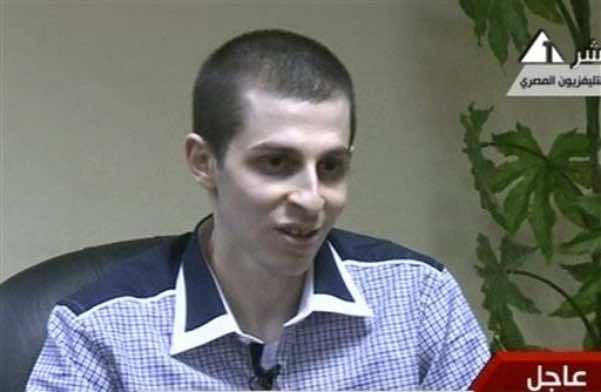 Soldier in “good health” after handover in Egypt, as transfer of 477 Palestinian prisoners is initiated under swap deal.

Israeli soldier Gilad Shalit has been handed over to Israeli officials in Egypt, as a prisoner swap deal between Hamas and Israel gets under way.

In an interview with Egyptian television at Rafah, Shalit said that he hoped that the deal that allowed for his release on Tuesday would help Israelis and Palestinians achieve peace.

“I will be very happy if all Palestinian prisoners are freed so they can go back to their families […] I hope this deal could help reach peace between Israelis and the Palestinians and strengthen cooperation,” he said.

He said that he feared that he would be in captivity for “many more years”, but was “very excited” to be headed home.

Shalit was in Israeli hands for the first time in five years and four months, reported Al Jazeera’s Cal Perry from Jerusalem.

Earlier on Tuesday morning, Shalit had been handed over to Egyptian authorities at the Rafah border crossing between Gaza and Egypt.

Groups of Palestinian prisoners are now being sent by bus to Gaza via Rafah, reported Al Jazeera correspondent Nicole Johnston from the border crossing, where Hamas’ military wing has been out in force.

Al Jazeera’s Sherine Tadros in Cairo said Shalit was reported to be “in good health” and was held inside an arrivals hall at Rafah, accompanied by Ahmed Jabbari, the head of Hamas’ al-Qassem military wing, before being transferred to Israel.

Another 334 were transferred to the Kerem Shalom crossing, at the southern-most point of the Israel-Gaza border. The first prisoners were dressed in civilian clothes, with their hands and feet manacled, the radio report said.

A convoy of vehicles left the Israeli Katsiout prison in Naqab, near the Egyptian border, before dawn on Tuesday. Vehicles carrying female prisoners also left HaSharon Prison in central Israel.

“There is this great sense of excitement [with] flags on the houses, villages putting up posters,” reported Al Jazeera’s Charles Stratford from the Beituniya border crossing.

“By and large, right the way across the West Bank … there is the sense that this is a national victory, if you like. Some are saying a historic day for the Palestinian occupied territories here,” he said.

That sense of excitement at Beituniya, however, quickly evaporated when, due to a last minute change of plans, it was announced that the prisoners would not be going through that checkpoint.

The announcement caused those gathered to throw stones at the border posts, prompting the Israeli army to fire tear gas.

The prisoner swap process was to begin with Shalit being handed over to either a Red Cross representative or an Egyptian official in Gaza who was to confirm to Israel that he was alive and in good health.

Israel was then to release 27 women prisoners, after which Shalit was to cross into the Egyptian Sinai.

Shalit, now 25, was captured in June 2006 by fighters who crossed into Israel from the Gaza Strip, governed by Hamas.

After his hand over, he is to be flown by helicopter to the Tel Nof air base in southern Israel, where he will be greeted by Prime Minister Binyamin Netanyahu, other leaders and close family. Later he will be flown to his home in northern Israel.

Israel has deployed a heavy security contingent of more than 1,000 police officers to secure the routes of the convoys, and both Israel and Hamas say there will be tight controls on information until after Shalit has been handed over.

The swap, in which a total of 1,027 Palestinian prisoners are to be released in two phases, began a day after Israel’s supreme court rejected appeals to halt the deal.

Relatives of Israelis killed by some of the Palestinians set to be released had urged the court to intervene, but it ruled against them, saying the matter was a political decision outside its domain.

Hamas has declared Tuesday a national holiday and erected a giant podium in Gaza City’s al-Katiba Park, where it plans to transport the prisoners after they cross into the Palestinian enclave from Egypt.

Ismail Haniya, the prime minister, and members of the de facto Hamas government in Gaza, leaders of other factions, relatives and tens of thousands of onlookers were expected to welcome the prisoners.

But not everyone will be celebrating. More than 4,000 Palestinian “security prisoners” will remain in Israeli jails.

A short walk from the al-Katiba Park, relatives have set a up a tent in solidarity with prisoners who began a hunger strike on September 27, because Israel dropped some of their privileges, such as the opportunity to study for an academic degree.

Saree Makdisi, an author and professor at the University of California, told Al Jazeera that the value of the prisoner swap should not be over-estimated.

“We have to remember that the Israelis raid the West Bank literally on a nightly basis, usually ten times a day, an average of 300-400 raids a month,” he said.

“On all these raids, they collect prisoner after prisoner, so in an average month, they capture 300-400 prisoners, held against international law, held in appalling circumstances.

Of the first tranche of prisoners to be released, 297 will be released into Gaza and 117 will return the West Bank, including 15 to East Jerusalem.

Another 40 Palestinians will be deported overseas to countries which so far include Turkey, Syria and Qatar, Hamas officials said.